To read more on these records and others in the pharmaceutical arena, please visit Clarivate Analytics Cortellis, where you may access full pdf documents of the same, along with expert analysis and indexing of their content to accompany detailing of such aspects as expirations, infringements, licensing and exclusivity.

The Patent Gazette provides snapshot analysis and indexing of pharmaceutically relevant patenting within days of its publication by patent offices. Primarily focusing on material from the main three patents offices (i.e., the EPO, USPTO, and WIPO), it provides brief descriptions of a patent’s content and seeks to link it to both prior patenting of relevance and to any commercial activity pertinent to the technology being described.

Subscription and access to Cortellis may be tailored and restricted to particular subject areas of interest, such as only its patenting content. For more details please do contact us. 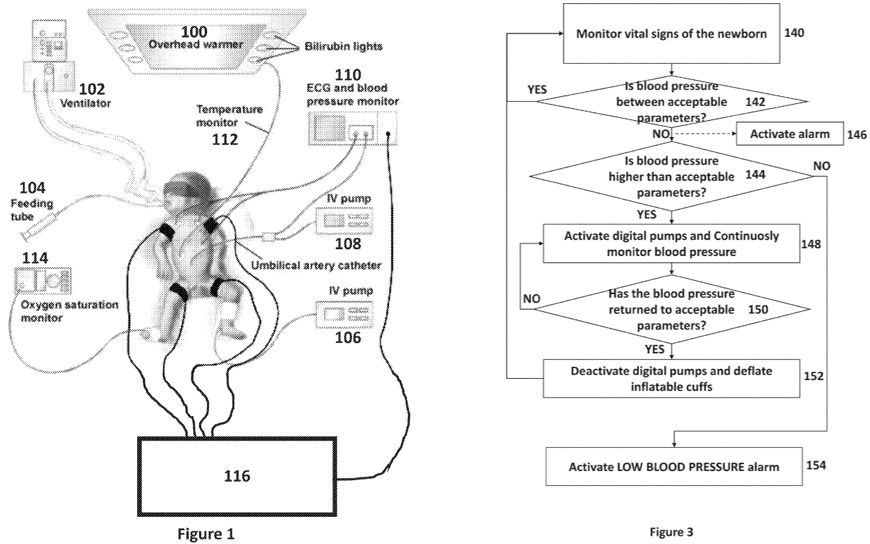 The inventor, Professor Imad R Makhoul, is the Director of Rambam Medical Center’s Neonatal Unit, in Haifa, Israel. His prior patenting includes claims relating to high-frequency mechanical fan ventilators for the treatment of respiratory failure, see WO9639216.

The assignee and the inventors, who are based in New Taipei City, Taiwan, are new to patenting, and this patent application would therefore seemingly describe Accurate Meditech Inc’s “Accurate 24” device, that it describes as being the world’s first sphygmomanometer that can be used in the night without disturbing the patient to measure blood pressure continuously for 24 hours, and that as part of a telemedicine care approach can synchronize the measured vital signs to a remote doctor. The company says that their device allows users to measure their heart rate, blood pressure and pulse propagation velocity within 30 seconds.

A wearable acoustic monitoring device that attaches to the neck with a disposable adhesive so as to measure respiratory acoustic signals. Within the invention’s background it discusses how the device may be useful for diagnosing a variety of conditions, including respiratory diseases such as asthma and chronic obstructive pulmonary disease.

The inventor, Professor Esther Rodriguez-Villegas, co-founded London-headquartered Acurable in 2016 in order to commercialize her tiny sensor that weighs around five grams, is called the AcuPebble™, and is the culmination of 10 years’ research at Imperial College London. For prior patenting in support of her device, see WO2012007719 (entitled, “Feature characterization for breathing monitor”) and WO2007099314 (“A method and apparatus for monitoring respiratory activity”) that are both assigned to ICL’s technology transfer arm, Imperial Innovations Ltd.

The AcuPebble™ sensor records respiratory acoustic signals of a patient and then applies signal treatment algorithms (AcuCore™) to extract from them the main parameters required for the diagnosis and management of a number of conditions such as sleep apnea, epilepsy, whooping cough, asthma and COPD.

An intraocular lens (IOL) injector with controlled insertion. The injector comprises a front part, having a loading chamber, a tapered delivery channel and a distal tip for exiting the IOL, and a handle portion including an actuator which delivers the IOL through a push rod into the eye of a patient. Published alongside WO2019224848 describing an IOL injector with push control device.

For prior patenting from the inventor in which he described an ophthalmic surgery device for performing vitrectomy, see WO2016030023 that is assigned to Rome, Italy-based AKtive SRL.

Andrea Chini is founder and CEO of AKtive SRL, a manufacturer of medical devices for ophthalmology whose website can be seen to feature a reusable IOL injector referred to as AK-1750.

WO2019224438-A1: “Device and method for recognising a label deposited on an object in order to securely produce drug preparations.”

Device for recognizing data from information present on labels on objects such as bottles, syringes ampoules and vials. The device employs cameras and optical character recognition so as to read labels present on objects, and also the graduations and indicators of volumes or weight present on laboratory equipment used in the production of pharmaceutical preparations.

La Rochelle, France-based Eurekam, was founded by Benoît Le Franc in 2012, to commercialize his DRUGCAM® device - a video assistance and control system for compounding anticancer drugs in a hood/isolator environment, that it says reduces the risk of medication error to zero. Based on proprietary artificial intelligence (AI) and image technologies, DRUGCAM® has reportedly become the leading solution in France for the automated control of drug products in oncology in healthcare facilities. This smart video system guides and monitors automatically and in real time a technician during preparation (vial recognition, syringe volume identification, barcode/datamatrix reading, video recording and quality report), in order to ensure the right product at the right dose for the right patient.

Vaccine monitoring systems comprising a server and an insulated portable container for transporting a tetanus-containing vaccine in a temperature-stable environment.

Kiwanis International describes itself as being a global community of clubs, members and partners dedicated to improving the lives of children one community at a time. The present invention is borne from a Purdue University graduate-course project of the inventor Tom Castonzo who is director of information technology for Kiwanis International. Working with students at a Fort Wayne, Indiana high school they built a technology that they hope could save the lives of mothers and babies in the most remote areas of the world. Their vaccine monitoring system can measure the temperature of tetanus vaccine vials that are being transported inside portable coolers over rivers, across valleys and through other rough terrains. The monitoring system transmits data about the vaccine’s temperature through cellular networks to the cloud where it can be continually monitored and act as a decision-support tool.

Their portable vaccine temperature monitoring system (PVTMS) monitors, validates, publishes, notifies stakeholders and analyzes the temperature of vaccines without the need for a Wifi connection or an electrical outlet. Costing about $65 to build, it uses a waterproof, NIST (National Institute of Standards and Technology)-certified and buffered temperature probe, connected to a microcontroller to collect the assumed temperature and GPS location (when available) of the co-located vaccine payload and publish the data to cloud storage. The PVTMS, through software code, analyzes the streaming data and publishes the findings to users based on pre-defined rules and event types. The PVTMS also collects the data and stores it in a data warehouse for analysis and to aid in strategic decision making. The PVTMS also has a data visualization engine which presents the data in several formats, available via the web on various devices including mobile devices.

Published alongside WO2019226605, ‘606, ‘866, ‘867, ‘870, ‘872, ‘743, and ‘744, in which the inventors describe further aspects of their intra-body controllable medical devices, including: methods for their deployment; propulsion and orientation control systems; power supplies; communications systems; and, their use for sample and data gathering.

Follows WO2019191207 in which the same two inventors described a miniaturized intra-body controllable medical device. Said patent application was originally assigned to one Enso Surgical Robotics Inc but was later reassigned to Miraki Innovation Think Tank LLC (with both companies being seen to share the exact same address in Cambridge, Massachusetts).

The inventor, Chris Velis, is the founder of Cambridge, Massachusetts-based Miraki Innovation, a technology investment and development firm that identifies medical breakthroughs that have the potential for global impact and builds those ideas into companies. He was the co-founder of Auris Health (also known as Auris Surgical Robotics), a surgical robotics company acquired by Johnson & Johnson in February 2019 for $5.75 billion (inclusive of milestone payments), that at that time was reportedly the largest venture funded medtech transaction in history. Could these miniaturized intra-body controllable medical devices come to represent another success story for Velis and Miraki’s portfolio of companies?

Method of using an electronic device (such as a smartphone) for detecting events indicating respiratory failure, by transmitting an inaudible acoustic signal toward the subject using a speaker, and acquiring a reflected signal through a microphone that is then used determine respiratory-failure. It is disclosed as being useful for monitoring a subject at risk of respiratory failure perhaps through their use of opioids, benzodiazepines, alcohol, sleeping aid medications, or anticonvulsant medications.

The inventor Shyam Gollakota is an Associate Professor of computer science at the University of Washington (UW) who has been named twice in Forbes’ 30 Under 30 list. In January 2019, it was reported how he and fellow researchers at the UW had developed a smartphone app, called Second Chance, that uses sonar to monitor someone’s breathing rate and sense when an opioid overdose has occurred. They report that their app accurately detects overdose-related symptoms about 90 percent of the time and can track someone’s breathing from up to 3 feet away.

Gollakota and another of the inventors named here, Dr Sunshine (Assistant Professor at the UW School of Medicine in Anesthesiology and Pain Medicine), have co-founded a UW spinout called Sound Life Sciences to commercialize this technology for which they have reportedly applied for US FDA approval.

Wearable extensible wrist band which includes a strap, an electronics module, a biological sensor, a holder coupled to the strap, a flexible printed circuit board and a connector. The wearable may be used to obtain information about the wearer's physical activity and/or health state, such as pulse rate, blood oxygenation, blood pressure, skin temperature, galvanic skin response, or other parameters that may indicate a wearer’s level of physical exertion. Previously the same two inventors described a wrist-mounted electrocardiography device in WO2016040098.

Perhaps interestingly, Verily Life Sciences (then Google) specifically included a “nonpublication request” when filing for this patent back in June 2014, suggesting it had been wishing to keep its content under wraps. This has not necessarily been a tactic it has sought to employ for its other patenting around a supercharged Fitbit®-esque health monitoring wearable device that we have been charting its development of in recent years - patenting for the technology being seen to have been published as far back as Christmas Eve 2014 (see WO2014205100, ‘5101, and ‘5102).

In April 2017, Verily launched the Verily Study Watch to collect health information including record electrocardiogram (ECG), heart rate, electrodermal activity, and inertial movements from clinical research participants. The watch has been used by thousands of participants in clinical research studies according to the company. In January 2019, Verily announced that it had received 510(k) clearance from the US FDA classifying the Study Watch as a Class II medical device for its on-demand ECG feature.

In November 2019, it was announced that Google and Verily’s parent company, Alphabet Inc, had made an offer of roughly $2.1 billion to acquire US wearable device maker Fitbit Inc, as it looked to cement a place in the now crowded market for fitness trackers and smartwatches. In a company blog post, Google’s senior vice president of devices and services, Rick Osterloh, said, “By working closely with Fitbit’s team of experts, and bringing together the best AI, software and hardware, we can help spur innovation in wearables and build products to benefit even more people around the world.”