Therapies poised to reshape the treatment landscape for hematologic disorders

Millions of people are affected by blood disorders, and the prevalence is expected to grow as our population ages.

It is not surprising that, according to the American Society of Hematology, the FDA approved several new therapies – or new indications for previously approved therapies – in 2019 for people living with non-malignant blood disorders. Those included two disease-modifying treatments for sickle cell disease and the first anticoagulant for venous thromboembolism management in children.

In the wings and poised to reshape the treatment landscape for hematologic disorders are two potential blockbuster drugs - Valrox (valoctocogene roxaparvovec) for hemophilia A and vadadustat for anemia related to chronic kidney disease - that are among the 11 included in the Cortellis Drugs to Watch analysis predicted to achieve annual sales of $1 billion by 2024.

Hemophilia A, also called factor VIII (FVIII) deficiency or classic hemophilia, is a genetic disorder caused by missing or defective factor VIII, a clotting protein. People with that disorder are at risk for painful and/or potentially life-threatening bleeds from even modest injuries. According to the U.S. CDC, the condition occurs in approximately one in 5,000 live births, and about 20,000 people are living with hemophilia in the U.S. Accurate data on the worldwide incidence of hemophilia is estimated at more than 400,000.

People suffering from the most severe form of hemophilia A often experience painful, spontaneous bleeds into their muscles or joints and that group makes up approximately 43% of the hemophilia A population. The standard of care (SOC) for such individuals is a prophylactic regimen of replacement factor VIII infusions administered intravenously up to two to three times per week or 100 to 150 infusions per year. Despite those treatments, many people continue to experience bleeds, resulting in progressive and debilitating joint damage, which can have a major impact on their quality of life.

One and done treatment

San Rafael, Calif.-based Biomarin Pharmaceutical Inc. has submitted a BLA to the FDA for its investigational AAV gene therapy, Valrox, for adults with hemophilia A. The therapy is designed to deliver functional copies of the FVIII gene into patients’ cells, enabling them to make the previously missing or defective FVIII protein. If approved, Valrox would be the first potentially curative (one and done) approach to hemophilia A, eliminating the need for blood transfusions and FVIII replacement therapy after a single infusion. Subject to completion of the agency's filing review, the company anticipates the BLA review to start in February. 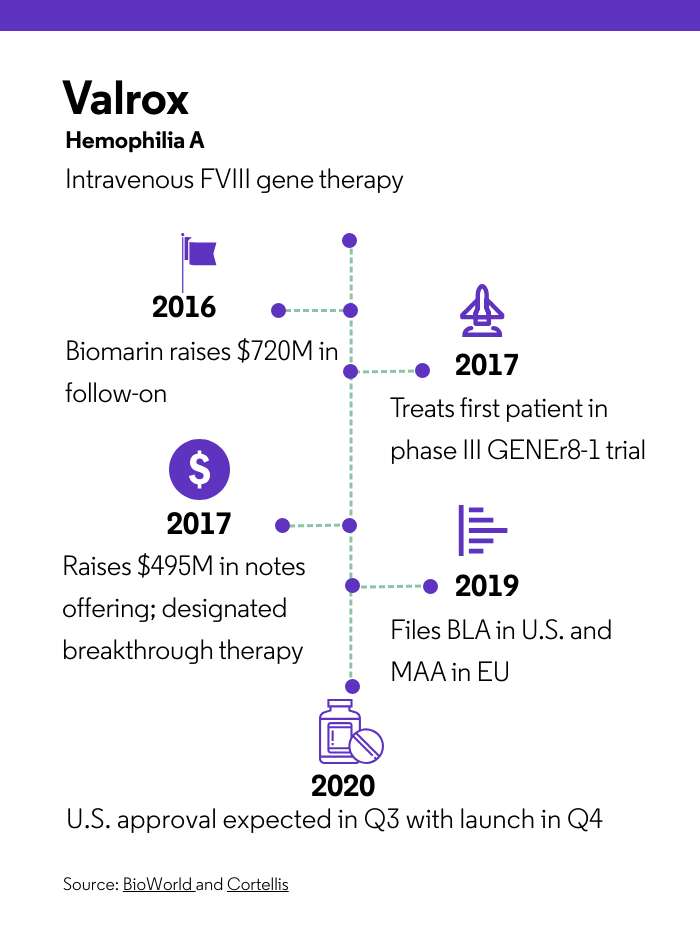 The FDA has granted breakthrough therapy and orphan drug designations; and the EMA has validated the company's marketing authorization application with the review under accelerated assessment.

According to the Cortellis Drugs to Watch analysis, the filings were based on interim data from the phase III GENEr8-1 study as well as three-year phase I/II trial data. In GENEr8-1, Valrox met the prespecified criteria for U.S. and EU regulatory review, with eight patients in a 20-patient cohort achieving FVIII levels of at least 40 IU/dl at 23 to 26 weeks; the ongoing trial has the goal of evaluating superiority of Valrox to the current standard of care, prophylactic therapy. The high-dose cohort in the phase I/II study showed 100% resolution of target joints, a 96% reduction in mean annualized FVIII usage, and all patients remained off FVIII prophylaxis. No thrombotic events or development of FVIII inhibitors have been reported to date.

"People with severe hemophilia A continue to experience clinically relevant breakthrough bleeds despite the current standard of care and can be limited in their physical activities," noted John Pasi, chief investigator for the phase I/II study and a principal investigator for the phase III study. "Valoctocogene roxaparvovec represents a potentially transformative investigative therapy that could improve patients' quality of life, including consequences of bleeding, physical functioning, role functioning, emotional impact, treatment concern and worry."

"As a treating physician, I am excited about the potential of the field of gene therapy to make a meaningful difference in the lives of people with hemophilia A," Pasi noted on the results.

In a presentation at the annual J.P. Morgan Healthcare Conference in January 2020, Biomarin Chairman and CEO Jean-Jacques Bienaime was excited to reveal that the company is ramping up productivity at its Novato, Calif., plant, more than doubling its capacity to 10,000 doses annually. He noted that the capacity upgrade is important as the firm wants to be able to supply the gene therapy market as quickly as possible "because first-mover advantage in gene therapy is fundamental in a sense that every time you treat a patient that patient is off the market."

Gene therapy certainly has the potential to revolutionize treatment for patients with hemophilia A. However, according to the Canadian Hemophilia Society, “Never have so many coagulation therapies been in development. In addition to the large number of therapies recently introduced, we have identified another 18 new therapies in development or soon to be marketed, including six clotting factor concentrates, four bypassing therapies to treat patients with inhibitors, two non-factor coagulation products and five gene therapy products.”

If approved, Valrox will certainly face competition from well-established FVIII replacement therapies, in addition to those that are nearing the market, the Cortellis analysis suggests.

Recently approved therapies such as Roche Holding AG's Hemlibra (emicizumab) and Bayer AG's Jivi (antihemophilic factor [recombinant] pegylated) are improving the options available to those patients. The hemophilia market is conservative in adopting new therapies, the analysis notes, and patients may be reluctant to switch to new products if their current replacement therapy works well. However, an unmet need remains, as approximately 75% of hemophilia A patients do not respond adequately to their treatment or even do not receive treatment at all. Despite a relatively low worldwide prevalence of patients, with orphan pricing, hemophilia A represents a large market.

In addition, Valrox is not without its own challenges, the Cortellis analysis notes. The drug fell short in the initial cohort of the phase III GENEr8-1 trial: of 17 evaluable patients, three failed to achieve FVIII levels above 5 IU/dl. The mean and median FVIII levels across the cohort were also lower than seen in phase I/II, at 33 and 36 IU/dl, respectively. Failure to improve the response once full data are available may impact the potential commercial uptake

The global market for hemophilia A last year was estimated to be close to $10 billion, and Bienaime in his presentation said that “an estimated 121,000 patients are located in the territories covered by the company. Although no pricing has yet been set for the gene therapy, the company has done a lot of payer research. He indicated that payers attribute a high value to the physiological correction of hemophilia A, and it appears the U.S. payer community would be comfortable with a price between $2 million and $3 million.

Given the fact that wholesale acquisition pricing for Hemlibra in non-inhibitor adult patients is between $600,000 to $800,000 per year, Biomarin has looked at pricing of between $1 million and $5 million. Since by launch date it will have four years of data on Valrox, the price could be set at four times the average price of Hemlibra ($700,000), establishing a price of $2.8 million. That would make it the most expensive one-time therapy, topping spinal muscular atrophy gene therapy Zolgensma (onasemnogene abeparvovec-xioi) from Novartis AG at $2.1 million. The company says that this first gene therapy for any form of inherited hemophilia could save health care systems more than $20 million over a typical patient’s lifetime.

For that reason, even if the penetration is modest, Valrox could post significant revenue. The Cortellis analysis predicts sales of $17.45 million forecast for this year, rising to $1.297 billion in 2024. However, while Biomarin is in the pole position with its gene therapy, potential competition in the pipeline from FVIII gene therapies in development may temper sales forecasts in the mid- to long term. Spark Therapeutics Inc.'s SPK-8011 entered phase III development in February 2019, having shown a 94% reduction in bleeds and a 95% reduction in FVIII infusions in a previous phase I/II study. Other direct competitors in phase I/II development include Ultragenyx Pharmaceutical Inc.’s DTX-201, Spark’s SPK-8016, Shire plc’s SHP-654 and University College London (UCL)/St. Jude Children's Research Hospital’s AAV2/8-HLP-FVIII-V3.

Anemia is one of the many complications of chronic kidney disease (CKD), which worsens as kidney disease progresses; most patients whose CKD has progressed to kidney failure have significant anemia. It is estimated that CKD affects 200 million people worldwide. The anemia in CKD is currently treated with injectable recombinant erythropoiesis-stimulating agents (ESAs), which are often associated with inconsistent hemoglobin responses and safety risks. 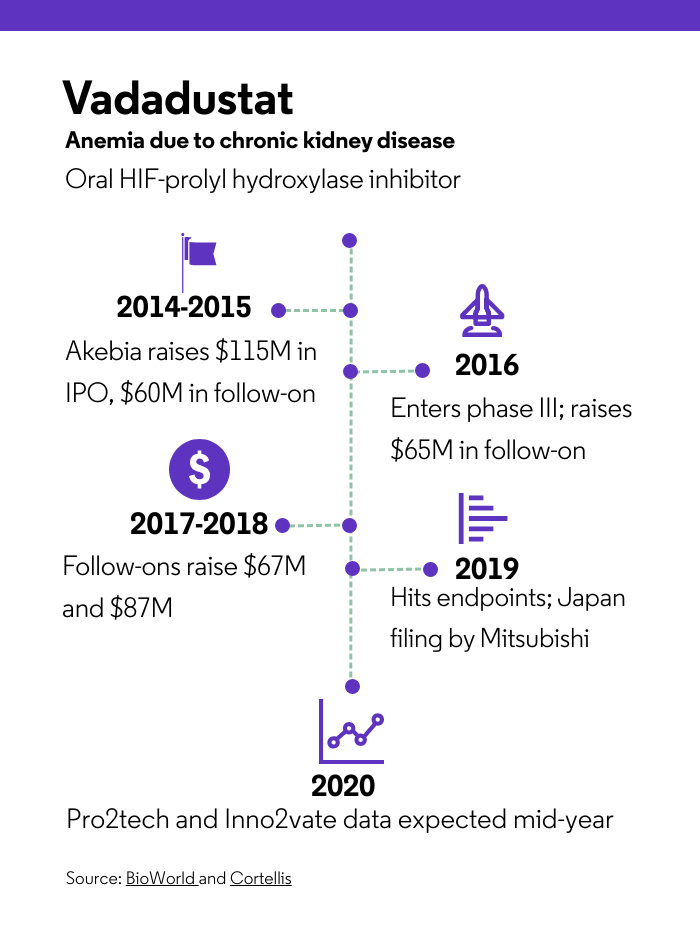 The need for more effective and safer therapies has led to the discovery of hypoxia-inducible factor prolyl hydroxylase (HIF-PH) enzyme inhibitors, a new class of agents for the treatment of anemia in CKD (see sidebar story). Those agents work by stabilizing the HIF complex and stimulating endogenous erythropoietin production even in patients with end-stage kidney disease.

Several HIF-PH enzyme inhibitors are currently in development targeting the estimated $3.5 billion renal anemia market, including Cambridge, Mass.-based Akebia Therapeutics Inc.’s vadadustat, which has advanced to late-stage clinical trials. In July, its strategic partner, Osaka-based Mitsubishi Tanabe Pharma Corp., filed an NDA with the Japanese Ministry of Health, Labour and Welfare, seeking approval for the product as a treatment for anemia due to CKD.

If approved, the company expects commercial launch during mid-2020, and filings in the U.S. and the EU are planned, those territories covered by Akebia’s alliance with Otsuka Pharmaceutical Co., Ltd.

Within the HIF-PH inhibitor class itself, and particularly from Fibrogen Inc.’s Evrenzo (roxadustat), the first-in class HIF-PH inhibitor, vadadustat will face direct competition. Fibrogen has partnered with Astellas Pharma Inc. and Astrazeneca plc for the development and marketing of Evrenzo, which has been approved in Japan (in dialysis patients) and China (in dialysis- and nondialysis-dependent patients) in the third quarter of 2019. An additional filing in Japan in non-dialysis patients is expected in the short term upon completion of a second pivotal study in that setting. The drug has also been filed in the U.S (for both patient populations) and filings in the EU are expected by March, according to Cortellis, following positive top-line data from the ALPS (nondialysis-dependent) and HIMALAYAS (dialysis-dependent) studies.

The analysis indicates vadadustat would also face competition from other well-established therapeutic approaches in CKD such as intravenous iron replacement products and blood transfusions that offer rapid increases in Hb levels.

Future direct competition will also come from Glaxosmithkline plc’s HIF-PH inhibitor daprodustat, which was submitted for approval in Japan in August last year.

The Cortellis analysis cites sales forecasts in 2024 of $1.188 billion for Evrenzo and $286 million for daprodustat. For vadadustat, sales of $2 million are forecast for this year, rising to $1.589 billion in 2024.

Out of basic science, a blockbuster: Vadadustat