Home » Blogs » BioWorld Perspectives » Conference Etiquette – is There an App for That?

Conference Etiquette – is There an App for That? 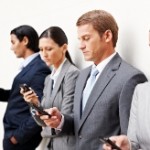 There’s a new contagious condition circulating that has even infected the biotech sector: e-Distraction, with bad manner side effects of indecorum, insensitivity and more. The wealthy are often regarded as egocentric and out of touch with reality by the 99 percent. However, only 1 percent of us may be wealthy, but it seems like 100 percent of us behave as if we are too important to ever be out of touch with one another.

Distraction is so rampant in society that it hardly even seems rude any more to multitask in conference sessions. There is so much competition for our attention that we are perpetually too preoccupied to focus on a primary task.

Out of 173 audience members in attendance at a panel discussion at the BIO CEO and Investor Conference in New York in February, I counted 52 who were giving undistracted attention to the goings-on. The rest were either texting, tweeting, web surfing, playing games(!), or actually talking on their phones. Four were dozing, so I assume their batteries had drained!

A recent performance of the New York Symphony at Lincoln Center was stopped by the conductor when a cell phone repeatedly rang during the performance. The owner of the evidently-too-smart-for him device claimed it was a recent purchase and that he did not know how to silence the ring (or turn it off either, evidently).

In a fleeting newscast pan shot this week, I saw four people participating in the 2012 Selma-to-Montgomery March re-enactment who were talking on cellphones as they passed the camera. I couldn’t help but think Martin Luther King Jr. and his fellow marchers were dodging bricks, attack dogs, high-pressure water and epitaphs – but not annoying, intrusive phone conversations.

I was at a comedy show about four years ago and a ticketholder was talking loud on a cell and fingering her smart device throughout the set. When the comedian could take no more, his act abruptly turned into a five-minute personal insult tirade that started out with the offender trying to trade barbs with the professional, but ended with her storming out in tears and the audience giving the comedian a standing ovation. I am not so sure the audience would react the same today. They’d either sympathize with the serial talker or be too involved themselves cleaning out their inboxes, tweeting a recap of the jokes to their followers or capturing the war of words to upload to video.

Biotech is a big and serious business, but courtesy and good manners have been around even longer than the first biologics license application, so let’s not lose our civility. After all, how would you feel if an FDA advisory panel member felt obliged to interrupt the meeting to tweet and take phone calls?

It’s no excuse, but part of the problem that emboldens this impoliteness may be the relaxed setting of the spacious conference rooms. I do not witness such discourtesy in the more intimate milieus for board meetings, staff meetings or one-on-one engagements. I can’t imagine a biotech executive not giving his undivided attention in wooing a VC in a conference tête-à-tête by cleaning out his inbox or cutting off the dialogue with, “I have to take this call – it’s my wife – No dear, spaghetti’s fine – Now, where were we?”

Upon contemplating the ever-increasing divided attention order-of-things-to-come trend, I’d like to know what does everyone think?

Well, I’ve exceeded 400 words, which is the new media attention-span article threshold. So, I need to wrap this up before the auto-censoring feature on my tablet termina - - -
You must login or register in order to post a comment.