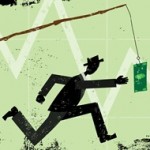 Biotechnology is an idiosyncratic industry in which some executives can stake their careers on the pursuit of orphan drugs that, at best, will offer only limited opportunity for corporate profits and investors returns, while addressing the usually unmet needs of a narrow patient base.

Other biotech execs pin their aspirations to the old-school home-run approach of developing a blockbuster drug to address a prevalent indication such as diabetes, and then basking for the next decade in the blockbuster revenue it generates.

Either way, success in biotech is a conceded longshot. And success is usually considered to be more of a company effort, while failure is generally plopped on the already-heavy-is-the-head crown of a C-level executive.

To quote a biotech honcho who spoke off the record to me once, “Everyone at my company covets my salary, but no one – not even my peers or board members – would ever take my job.”

Biotechnology was founded to be an altruistic industry; however, since making market dreams come true requires financing, biotech execs are also expected to deliver the ROI.

In preparing to publish the BioWorld Executive Compensation Report 2013: Trends in C-Level Salaries and Benefits in the Biopharma Market, I was somewhat surprised by the data showing that the salaries and compensation packages for the six top biotech executive positions have remained stout despite the ongoing slow-to-recover global economy.

The report presents compensation data for execs from 203 U.S. biotechs and 55 non-U.S. companies and shows that even though the biotech market has undergone corporate liquidations, M&As, executive retirements, recession repercussions and other events that impact executive compensation, biotech companies still are inclined to pay for leadership in that most precarious of markets that is inherently beset with all the trappings of a video adventure game or a horrible reality show.

The Longest Warm-Up Act in History

Throughout, and often beyond the standard decade of R&D to bring a drug to market, executive officers must harness and channel the physiology of nature, decode and manipulate the functions of biology in the human (and animal) body, tactfully engage the watchdogs at the regulatory gates and beguile an antsy stakeholder audience with the longest warm-up act in history while waiting for the market-approved headliner drug to arrive.

On top of that, general consternation is derived from the perception that biotechnology’s C-suite suits reside comfortably in the rarified land of the one-percenters, while its patient base lives in compromised health in the overcrowded 99 percent hinterlands.

Conversely, few other markets have the evidence to support a claim that they attend to humanity’s most rudimentary, yet most vital, assets: health and life. But the biopharma industry, managed by an ever-changing conglomeration of C-level executives since 1977, has methodically evolved to be productive and profitable.

The absence of Amgen Inc.’s former CEO, Kevin Sharer, and its former VP, R&D, Roger Perlmutter, both of whom retired in 2012, will open the way for a new set of salary and compensation leaders to top the list that Sharer, who made $1.7 million in salary in 2011, has led for the past four years.

That is a lot of money, but it doesn’t nearly equal the $16 billion that Amgen made in 2011 or the $140 billion in revenue that the biotech made during the decade of Sharer’s and Perlmutter’s tenures, which oversaw the approval of 10 major drugs and many follow-on therapeutics.

Biotech execs are not paid to concoct gourmet beverages, make designer headphones or score touchdowns. They do not manufacture products that entertain us, recreationally intoxicate or make our lives convenient; rather, they straightforwardly address the consequences of obesity, cancer, addiction, hearing loss and other health outcomes that often arise from partaking in the products that are marketed by other industries.

All that amid the typical complaints that “You’re taking too long to develop life-saving drugs” or “Your curative products cost too much” or “Your one-of-a-kind therapeutics are not guaranteed to work.”

In biotech, success has a price: time and money spent. But it has no guarantees – unless you acknowledge that R&D setbacks are a certainty.

And executive salaries don’t usually bankrupt a biotech, but failed leadership can. So, perhaps taking a deep breath to relax and consider the mission these well-paid executives have undertaken is appropriate.

On the other hand, there is the premise that if you have a passion to do something, you would do it for free. Well, playing a six-years-long game of FDA chess, engaging in a decade-long round of “Are You Smarter Than a Biomarker” and trying to attract, then avoid, and ultimately appease skittish investors in a world in which high technology has eliminated all hiding places, would be too much to expect of a person to do for free.