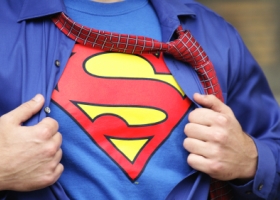 The invasion of the multidrug-resistant superbugs is not a nightmare in the making. It’s already here. And it could be years before a new superhero lands in Metropolis to knock out the worst of the worst of these villains that are set on world domination.

In a twist on the usual comic book tale, the super-resistant strains of CRE, malaria and tuberculosis threatening the world today are not the work of a mad scientist scheming away in a remote underground lab. They are a force of nature – helped along by our over-reliance on cheap, decades-old anti-infectives.

But scientists could hold the answer to stopping the bad guys in their tracks. “All” they need to do is identify a superhero, or discover a form of kryptonite, to strip the nasty bugs of their power. The trouble is that many of the scientists who know these bugs, and the big pharma firms the scientists work for, are ignoring the problem.

That wasn’t always the case. In years gone by, big pharma was on the frontlines of the pathogen battle. Then the generics took over the fight, and the cost and time involved in developing new drugs soared. As a result, big pharma retreated – to a hero-for-hire industry that’s focused on blockbuster drugs that can command high prices, multiple indications and long-term use.

Unfortunately, the heroes that chase down superbugs, especially those terrorizing developing countries, don’t fit that costume. They have to be affordable. And their use has to be limited, so there can be no indiscriminate prescribing, off-label promotion or expanded indications. Otherwise, the bugs will learn the secrets of their powers and devise a way around them.

When big pharma scientists redirected their X-ray vision to blockbuster drugs, they created a brain drain in the R&D necessary to identify a new breed of superheroes to take on drug-resistant bugs. Some of the missing-in-action scientists were the ones who had discovered useful molecules and figured out how the bugs evolve their super resistance. When they fled Metropolis, they took that knowledge with them.

It will take many, many years to overcome the brain drain, Helen Boucher, director of the Infectious Diseases Fellowship Program at Tufts Medical Center, told BioWorld. “If we ever can,” she added.

Meanwhile, as biotech startups scramble to find the money and race against the clock to fill in the knowledge gaps to develop a new brand of hero that might appear on the scene in another decade or so, the world continues to face emerging strains of virile superbugs that make yesterday’s superhero anti-infectives look like impotent has-beens.