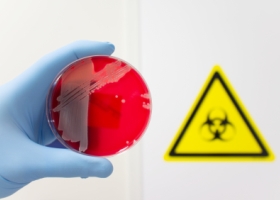 Not so many years ago, this would have been an absurd remark. With doctors and high-tech medical care all around, a hospital seemed like one of the safer places in the world to be.

But then, not so many years ago, age-related macular degeneration likely would have blinded many patients, as it did my late grandfather, pre-Macugen, pre-Lucentis.

Things change, and not always for the better. The rise of resistant infections, especially the hospital-haunting and deadly methicillin-resistant Staphylococcus aureus (MRSA) has kept drug developers scrambling for new weapons against this bug and others.

Until lately, the FDA hasn’t helped much. “Basically, we took a five-year hiatus on antibiotic development,” noted Paul Edick, CEO of Durata Pharmaceuticals Inc., who spoke with me on the phone last week, after the company submitted the new drug application for dalbavancin.

Durata is asking the FDA to approve dalbavancin first for acute bacterial skin and skin structure infections caused by gram-positive microorganisms, including MRSA.

The drug – a second-generation, semisynthetic lipoglycopeptide – came from Pfizer Inc., which spun out Durata with dalbavancin in 2009, having lost interest in developing anti-infectives since gaining the asset in the takeover of Vicuron Pharmaceuticals Inc. in 2005.

By the time dalbavancin fell into Durata’s hands, it had garnered three “approvable” letters from the FDA. The first involved “check the box” things that “were no real big deal,” Edick said.

Pfizer also wanted to move manufacturing in house. Setting up for this, the pharma company found that its assay for endotoxin was more sensitive than regulators insisted on, so the firm asked that the FDA restate the parameters in such a way that Pfizer’s test fit the bill.

“The FDA said, ‘Thank you very much,’” and sent another “approvable” letter re-specifying the stricter endotoxin measures, Edick said. Everything seemed ready to go.

Pfizer then, “surprisingly, got a third ‘approvable’ letter, saying, ‘Please justify the non-inferiority margins in your trials,” he said – margins that had been set by the agency itself. “What they were in essence asking a sponsor to do is to justify their own guidance, which makes no sense.”

All antibiotics in development had to do the same thing in order to continue.

Times had grown hard for antibiotics. When problems – liver toxicity, mainly – arose with Sanofi SA’s Ketek (telithromycin), the FDA was “under a lot of pressure to either go to placebo-controlled trials or find a surrogate marker,” Edick said. “They were basically pushing back on the industry and saying, ‘You guys figure it out.’”

Pfizer put the drug on the shelf. At about the same time Durata took over dalbavancin, the FDA withdrew its guidance altogether. So, until the summer of 2010, there wasn’t any at all. “We met with them in June, and they issued the new guidance in August,” Edick said. In September, Durata gained a special protocol assessment for its experiments.

Today, “there’s a bunch of antibiotics, all of a sudden making it through the development process,” he said, including candidates from Trius Therapeutics Inc., The Medicines Co., and Cempra Inc.

“You can’t do placebo-controlled trials in studies like this, because people die,” Edick pointed out – but the FDA found a pair of studies, conducted in the UK in the 1930s, that did just that. These trials with erysipelas patients, comparing “the cephalosporin of that day” against placebo, formed the basis for the surrogate statistical endpoints on which the agency finally decided, he said.

In the patients who survived, skin lesions were seen to have stopped growing at about the third or fourth day. Among those who had arrived with fevers, temperatures had returned to normal in the time frame as well.

Hence, the new, primary dual endpoint – a statistical one that only projects a clinical cure, which must be verified (secondary endpoint) by a physician at day 14. The FDA also changed the margin of error on non-inferiority, reducing it to ±10 percent, from the old guidance of ±12.5 percent.

‘A Reasonable Thing to Do’

“It’s actually worse than that,” Edick said, mainly because of the fever measurement.

“The physicians take a Magic Marker and outline the lesion,” he said. “After three days, if the lesion has stopped growing – cessation of spread, is what they call it – you’ve hit that first endpoint. If you had fever at baseline, you need to have three readings of no fever between a certain period, like 48 to 72 hours. That’s what makes these studies extremely difficult. You’re taking a temperature every six hours,” though ordinarily, nurses do so at their shift changes.

Worst of all, for antibiotics developers, is that “missing data equals failure,” Edick said. “If you don’t have all of those fever measurements at day three, the patient is automatically a failure, even though, by day 14, they could be absolutely cured.”

Durata set the bar even higher for itself, enrolling much sicker patients than those tested by other sponsors – larger lesions, higher white blood cell counts. “Also, we didn’t use lymphadenopathy as a criteria for systemic disease, because European regulators don’t consider it accurate as a measure for that,” Edick said. (The development plan in general is different for Europe, where the primary endpoint is the doctor exam at 14 days.)

Even with the more severely afflicted patients, “we still hit all the endpoints” with dalbavancin given in two doses, spaced a week apart, he said. What’s more, the doses do not require anything like the five to nine-day hospital stay for intravenous infusion that “the vast majority” of patients need now, Edick said.

“This, we think, is going to be extremely important from a clinician’s standpoint,” he said.

All the turmoil ahead of nailing down the regulatory guidelines for antibiotics – including a weird endpoint based on ancient, unethical experiments – seems likely to turn out worthwhile. “If you step back from it, now that we’ve done these studies, one could argue, this is a reasonable thing to do,” Edick said.