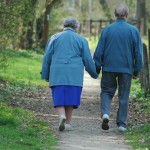 Everyone loved my grandmother. That's why they were rather relieved to hear she had died.

My grandmother spritely went about her business against the grain of at least six diseases and with the help of four surgeries, six prescription drugs and four medical devices after becoming a nonagenarian, but she also was mentally prepared for death, mainly because her joints, organs, bones, cells and her five senses were either abandoning or mocking her with frustrating and tormenting bouts of blindness, forgetfulness, ignored nerve center commands and pain . . . especially pain. She was putting up with a lot for the privilege to remain alive.

She was as active and full of life as any middle-aged woman one-third her age and she acknowledged that she had led a full and happy life. The only thing she complained about was the tardiness of Death.

"We can't just re-write the rules on death or the Grim Reaper will pass on while he's waiting for us to expire," she'd say. "Either these drug companies are making a fool of Death, or Death is fooling with all of us."

Which brings me to the new normal objective of life on drugs: to keep on living . . . forever!

Since the advent of the organized life sciences market more than a century ago, and increasingly since the 1976 addition of the biotechnology industry, humanity has been teasing Death with the old soul-on-a-string gag, faking mortality, and then yanking the dead herring away just as death stoops to claim it.

By 2025, my generation will be walking around like athletic zombies: sprightly bouncing around on titanium knees that could take us cross-country, but without the cognitive ability to find our way to the front door.

The world's population will increase by another 1 billion people by 2013 and is on target to increase to 10 billion by 2025. That's the equivalent of finding room for another China on the surface of the Earth every four years . . . only this time, this billion-member demographic may include members of the first born-immortal generation. We can keep people alive, but how do we feed, educate, employ or just stomach that many people? Face it! A gaggle of immortal vampire-ish citizens (at least vampires get to stay home during morning rush hour commutes) would be a millstone on society.

One day soon, we may cure death — then what? When I fantasized about my immortality, it was with visions of a muscular Superman, a suave Dracula and even a vivacious Jack LaLanne. Yes, I wanted immortality, but I wanted it stuck on age 45! Well, we're getting our wish, but the bio-genie has tricked us . . . we forgot to ask to stop aging!