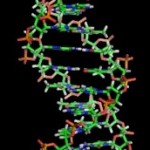 MONTREAL ‑ At this week’s American Society for Human Genetics annual meeting, where there is a whole genome sequence there is somebody bringing up privacy concerns. Do you really want your genome data to be laid bare? Will it start in a research database, move to your doctor’s office, and soon enough be found floating around on the Internet?

Most of those privacy concerns focus on medical issues, which makes a lot of sense. Certainly, most people would not feel warm and fuzzy about having their insurance companies know that, like Craig Venter, they have a higher-than-average risk of developing Alzheimer’s disease.

Nor do people necessarily want to know these things themselves, especially when there’s nothing to be done about the disease in question. Nobelist James Watson recounted specifically refusing to have his ApoE status made public, or even to find out about it himself. He had a grandmother with late-onset Alzheimer’s disease and doesn’t really want to know what the future may or may not hold.

Watson’s ApoE status can, of course, be inferred from his variants in nearby genes.

And the question of how medically useful genomes will be if their owners refuse to find out about the medically relevant alleles is a whole other question, of course. I suppose that this one will be solved with the passage of time, as more and more risk variants are discovered and that stretch of base pairs that is now mind-numbingly boring turns out to harbor a risk variant for something nasty.

Still, one thing I haven’t heard mentioned is this: the best guess for the percentage of children born to married parents whose biological father is someone other than the husband of their mother is 8 percent to 15 percent. Precise data, for obvious enough reasons, are hard to come by. But for men whose suspicions are large enough to get paternity testing done, the number is 30 percent.

If genome or exome sequencing becomes part of routine medical care, what happens when the sequence data doesn’t align?

Watson is clearly less worried about his wife than he is about his grandmother. In his plenary talk, he expressed his frustration that his son Rufus, who has schizophrenia, refuses to be sequenced – to ease his own worries: “The moment you have a son that’s not normal, you wonder whether you could have done something different,” he told the audience. In such cases, he thinks that sequencing of parents and their children could put the parent’s mind at ease that their children’s condition is due to “a genetic injustice, not something you did . . knowing that won’t make their child healthy, but parents won’t have the double whammy of thinking they did something wrong.”

I feel for Dr. Watson; and at the same time, I think about some other family that does get sequenced, and then has its own double whammy of illness and paternity to deal with. Or of the family that refuses to get sequenced. Will such refusal, for whatever reasons, in time come to be seen as a tacit admission that there’s something to hide?

I have no answer – I doubt there is a good answer. Certainly, the answer cannot be to forgo sequencing and the medical opportunities it offers. Still, I’m glad I’m not the family doctor who, in a few years, will take those cheek swabs ‑ and then, every so often, will need to figure out what to say about the results.