World’s Oldest Clinical Trial . . . and Health Economics Not Far Behind 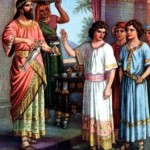 How old is our clinical trial system?

But according to an article in the British Medical Journal, the concept of randomization was used even earlier, in agriculture experiments in the 1920s. And even before randomization, controlled clinical trials were taking place as early as 1747, when James Lind conducted an experiment in which groups of sailors with scurvy were given various supplements, including citrus fruits.

“Prove thy servants, I beseech thee, ten days; and let them give us pulse to eat and water to drink. Then let our countenances be looked upon before thee, and the countenance of the children that eat of the portion of the king's meat: and as thou seest, deal with thy servants." So he consented to them in this manner and proved them ten days. And at the end of ten days their countenances appeared fairer and fatter in flesh than all the children which did eat the portion of the king's meat.

Simon’s point was that our clinical trial system might be due for a bit of modernization.

But here’s another interesting fact: after Daniel proved that veggies and water were healthier than meat and wine, King Nebuchadnezzar changed the prescribed diet for the Jewish youths who were brought to live with him. But when James Lind proved sailors with scurvy could be treated with citrus fruits and restored to health within a week, it took 50 years for the British Navy to make lemon juice a compulsory staple on ships, and soon after it was replaced by a cheaper substitute: lime juice.

So while clinical trials may be old, concepts like health economics and generic substitution are not exactly novel – they’ve been a part of the system about as long as the system has been in existence.