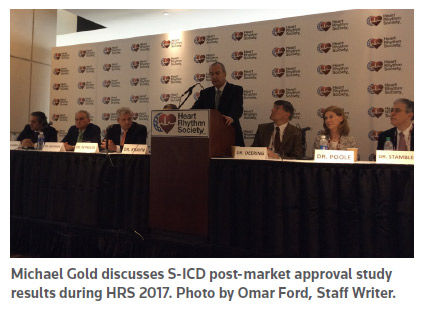 CHICAGO – A post-market study of Boston Scientific Corp.'s subcutaneous ICD (S-ICD) supports long-term use of the device in patients. Michael Gold, president of the Heart Rhythm Society presented the results during a late breaking clinical trials session at the conference. Results of the study are set to be published in the latest edition of the Heart Rhythm Journal.

"The results were very encouraging for the device," Gold said. "We'll be able to use this cohort to understand long-term, the functioning of this device."

The non-randomized registry was initiated in 2012. The study included 1,637 patients implanted with the device at 86 U.S. medical centers. Nearly two-thirds of the patients evaluated in the study were primary prevention patients with a low ejection fraction, which represents the highest proportion of patients that are implanted with ICD devices. Additionally, more than half of the patients had co-morbidities such as heart failure and hypertension, and more than 13 percent were on dialysis for end stage renal disease.

The study will have a mean follow-up of about two years and will continue to five years for all patients.

Kenneth Stein, senior vice president and CMO, Global Health Policy and Rhythm Management, for Boston Scientific said it's critical for the company to be able to demonstrate it can take results in a clinical trial environment and show those same results a real world setting.

"The analogy that I make is that you can learn a lot about polar bears by visiting the zoo, but you don't really learn everything about polar bears," Stein told Medical Device Daily. "You've got to [observe] them in nature. The same is true with these technologies."

He added, "This is not just a niche device, but this device really is broadly applicable to typical defibrillator patients."

To further develop the clinical body of evidence in support of the S-ICD system, Boston Scientific initiated a worldwide study called the Multicenter Automatic Defibrillator Implantation Trial with Subcutaneous Implantable Cardioverter Defibrillator (MADIT S-ICD) last month. The study will evaluate the survival benefit of patients treated with the Emblem MRI S-ICD System – the latest generation S-ICD system – who are aged 65 and older with a history of prior heart attack, diabetes and moderately reduced left ventricular ejection fraction.

"MADIT S-ICD is going to look at patients who are not currently indicated for defibrillators but are at high risk for cardiac arrest," Stein said. "The hope is to show that we can save lives by implanting the S-ICD in those patients."

The S-ICD System is designed to provide life-sustaining therapy to patients at risk of sudden cardiac arrest. The technology differs from transvenous leads because the implantation of the system is entirely subcutaneous, eliminating the need for electrical wires to be placed in the heart. The S-ICD System detects accelerated and disorganized heart rhythms and provides therapy through delivery of an electrical shock to restore the heart's normal rhythm.

The device is the only subcutaneous ICD on the market. Stein noted it took about 12 years for the technology to gain approval.

"There is no competitor for it, and there's nothing directly comparable that we see coming to the U.S. market for years," Stein said. "It's a complicated technology and that's really an obstacle to other [companies] that might want to duplicate it."

The revenue from the device was partially responsible for Boston Scientific having a strong 1Q17.

Joshua Jennings, an analyst with Cowen and Co. said the company's CRM business continued its rebound exceeding expectations by 13 million and benefited for the 4th consecutive quarter with "strong contributions" its S-ICD technology.