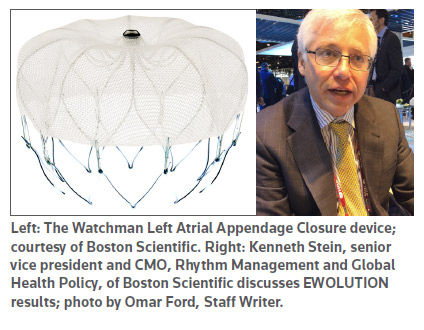 The prospective, single-arm, multicenter EWOLUTION registry evaluated 1,025 patients with non-valvular AF who have a high risk for stroke and systemic embolism.

In the study, patients were enrolled at 47 centers throughout Europe, Russia and the Middle East. More than 70 percent of the patients were deemed unsuitable for short or long-term anticoagulation at the time of Watchman implantation. Transient ischemic attacks, ischemic stroke, vascular disease and a history of major bleeding were present in approximately half of the patients.

"This is one of the largest populations that's ever been studied with the Watchman device," Kenneth Stein, senior vice president and chief medical officer, Rhythm Management and Global Health Policy, Boston Scientific, told Medical Device Daily.

At one year post implantation of the device, the results demonstrated an 84 percent reduction in the annual stroke rate was roughly 1 percent as compared to predicted rates of untreated patients with similar risk profile and a reduction of 48 percent in the annual rate of major bleeding (2.6 vs. 5.0/100 pt-years) as compared to predicted rates for patients treated with warfarin.

"If you look at the clinical characteristics of patients in the study, their predicted rate of stroke if they hadn't been treated with anything would be 7.2 percent," Stein said. "So it's a huge reduction in risk of stroke to these patients, and its comparable to the type of reduction that we've projected based on all of our critical trials."

The Watchman device was CE-marked in 2005 to prevent thrombus embolization from the left atrial appendage and reduce the risk of life-threatening bleeding events in patients with non-valvular AF who are eligible for anticoagulation therapy, and in 2012 the CE mark indication was expanded to include those who have a contraindication to anticoagulation therapy.

The device, which is a tiny umbrella shaped product, is implanted using a thin catheter and secured on the left atrial appendage, a thumb-sized muscular pouch connected to the left atrium of the heart.

The path for approval in the U.S. was more arduous. Watchman went in front of an FDA panel three times before it finally managed to get a nod from the agency. (See Medical Device Daily, March 17, 2015.)

The addition of Watchman has helped to move the growth needle forward for Boston Scientific. In its most recent earnings quarter the company said that organic revenue was up by 9 percent year-over-year.

"Boston Scientific has benefited from a string of new products, including ... the Watchman atrial closure device among others," said Debbie Wang an analyst with Morningstar.

She added, "Although prior-year comparisons should grow challenging soon, we think there is further room for sustained gradual growth, especially with products that remain in the earlier stages of market development, such as fractional flow reserve and left atrial appendage closure."

"We expect that it will be multiple years before that trial is done and we see if that device is approved," Stein said.

Previously, Boston Scientific had a next generation version of device called Watchman FLX that was released in Europe. In April of last year, the company pulled the device in Europe because of a high embolization rate.

Stein told Medical Device Daily that Boston Scientific is developing a new generation Watchman in the U.S. The company is looking to do a clinical trial for the device next year.