Home » Blogs » BioWorld Perspectives » On the ‘Gom-Boo,’ Ampligen, and Holding Out Hope

On the ‘Gom-Boo,’ Ampligen, and Holding Out Hope 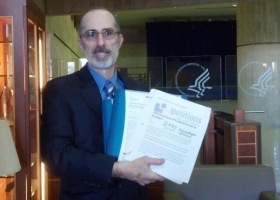 About a week ago, my obituary arrived by email. But something related, which you might think is weirder, happened Tuesday afternoon, and all of it involves chronic fatigue syndrome (CFS), and Hemispherx Biopharma Inc.’s drug candidate for it, Ampligen.

More specifically, it involves Bob Miller, 54, who is on a hunger strike. Miller stopped eating about the same time my obituary showed up, in protest of the FDA’s refusal to approve Ampligen (rintatolimod), the Toll like receptor 3 modulator for CFS that was given an unfavorable review by the FDA’s advisory panel in December, which I covered.

I talked with Miller by phone Tuesday. He lives in Reno, Nevada, because that’s the headquarters of the Ampligen trials. Miller sounded weak but determined. He choked a few times, when the subjects of his wife and twin sons, age 12, came up.

OK, let me get the obituary thing out of the way. Like most people with a handful of things going on at once – and like a lot of people who are simply self-absorbed – I’ve put my name in a Google alert, because I want to know if somebody online mentions me or one of my projects.

You’ve probably guessed the next part.

Delivered via Google alert, the obituary had everything spelled right (no “U” in my last name, like a lot of people tend to add. Not related to that guy!), but it got the age wrong (58, nope. One more year to go, why rush things?).

Of course, I’ve gotten Google-alert obituaries of “myself” before. I always read them, if only to find out what this other guy with my name was like, and at what age he died. Sometimes, I try to imagine myself into deceased person’s life. This latest one had been a coal miner in Kentucky for 15 years.

By Another Name, the ‘Gom-Boo’

Nobody knows what causes CFS, so I asked Miller, who’s been sick for 30 years, how his disease first manifested. He said he developed flu-like systems that would not go away. His co-workers passed it off as what they called the “gom-boo,” the name for any of a number of infections they picked up in the moist, black-dusty, oxygen-deprived environment where they worked.

Miller was a coal miner in those days, he said.

I registered the coincidence mentally, and went on with the interview. Heard how Miller, after the coal-mine job ended because of his absenteeism, could not hold down employment. How he became bedridden. How 17 years passed before he saw a doctor who diagnosed his CFS.

‘The FDA Has the Power’

Gone are the days when CFS was considered a “fake” disease, masking laziness or a person’s failure to take vitamins. I knew the horrid roster of CFS symptoms. Here’s how they are expressed by Wikipedia and others: post-exertional malaise; unrefreshing sleep; widespread muscle and joint pain; sore throat; headaches of a type not previously experienced; cognitive difficulties; chronic, often severe, mental and physical exhaustion; muscle weakness; increased sensitivity to light, sounds and smells; orthostatic intolerance; digestive disturbances; depression; and cardiac and respiratory problems.

At the FDA advisory panel meeting, a parade of people testified about CFS, and the dire need for a drug like Ampligen that seems to work. Except that there aren’t any drugs like Ampligen.

“The FDA has the power to be able to do this,” Miller said. “The company is willing to sit down with the FDA, sit down with anybody, and trying to figure out how to move this forward, without the drug company going away,” since it lacks the money for much more clinical work, which the agency wants.

As the interview came to close, after I thanked Miller for talking, he asked, “What was your name, again?”

I told him. There was a two-second pause. Quietly, Miller said, “I knew a Randy Osborne when I worked in the coal mine.”

The same one, it turned out. Miller had not seen him in years.

And so I ended up breaking the news of my namesake’s death to his previous co-worker and, likely, friend. (It’s not easy to work in a coal mine, I would imagine, without becoming friends.) I broke the news to a man who may die himself, as a result of his hunger strike. He’s already been given saline for kidney problems caused by the fast, but has vowed not to take food until Ampligen moves forward, for the sake of himself and as many as a million other patients in the U.S.

I told my girlfriend about the interview, and the identical names, and the coal-mine connection. “What are the odds?” she asked. Over the past few days, I’ve been thinking about other odds. Of Ampligen finding its way to patients, somehow. Of Miller making his point, before time runs out.