Home » Blogs » BioWorld Perspectives » Talk to your doctor: How even annoying DTC ads can contribute to patient communication

Talk to your doctor: How even annoying DTC ads can contribute to patient communication 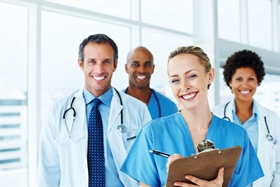 A few years ago I went to the nearby immediate care with a minor but irritating cough that wouldn’t go away. Three visits later – after two utterly ineffectual rounds of antibiotics and a prescription for a cough medicine that didn’t alleviate my cough though it helpfully revealed that I should never take codeine – I finally started digging around online. My search led me to a condition that explained my cough as well as a couple of other minor symptoms I hadn’t even thought to mention during my earlier visits because they didn’t seem related. I returned to the doctor, self-diagnosis in hand, and he confirmed: a relatively mild case of acid reflux, which could be adequately managed with an over-the-counter pill. Mystery solved.

I relate that experience not to slam the hardworking doctors at immediate care but to drive home the need for a common vocabulary between physicians and patients. In my case, a cough was a fairly nonspecific symptom that could be caused by the common cold, a bacterial infection, an allergy or even signal something more serious. What I was lacking was a way to accurately articulate the type of cough I had in a way that would cause my doctor to immediately snap his fingers and say, “I know exactly what you’ve got.”

After working on a recent article for BioWorld on direct-to-consumer (DTC) advertising, I’ve come to realize perhaps if I’d been watching more commercials I might have been able to identify my symptoms much earlier and saved myself the co-pay.

A strange thought, indeed. I never imagined I would find myself defending pharmaceutical commercials.

Since the FDA relaxed its advertising restrictions for pharma companies in 1997, there’s been an onslaught of television, print and online commercials, featuring drugs to treat everything from migraine to toenail fungus, some in full color and unappetizing detail for those unfortunate folks who thought they’d enjoy a snack while watching this year’s Superbowl. And it’s engendered substantial criticism – some of it warranted – with editorials calling out pharma’s greed, the U.S. society’s overmedication and the invention of diseases. Like everyone else, I roll my eyes at the inevitable erectile dysfunction drug commercials that pop up anytime I turn on a televised sporting event. And I like to think I am nowhere naïve enough to pretend that drug companies are operating on purely altruistic motives, with nary a thought to their bottom lines.

Having got all that out of the way, though, I also think there are several ways in which pharma DTC efforts can actually be beneficial for society. For one, a well-crafted DTC campaign can serve as an educational tool for patients seeking answers to symptoms that are irksome but not life-threatening and provide a common lexicon to improve communication between patients and doctors.

These ads, with their sheer pervasiveness in digital media, also can educate nonpatients, with whom the need to communicate is obviously just as important, as evidenced by the recent reports of a myeloma patient kicked off an airplane due to a miscommunication issue. Pharma ads can shed light on disorders that are not well known and, hopefully, remove some of the stigma and embarrassment associated with other conditions.

But, on a broader level, DTC ads can be part of a host of digital resources that are reshaping the entire health care industry. These days, we as health care consumers want to understand our conditions and our treatment options; we want to have a voice in any treatment decisions. And that increasing patient-centric approach to medicine will only be compounded by newly launched efforts in precision medicine, which are asking patients to become part of the research process by sharing their genomic data.

Let’s face it: We are well past the age of the passive patient, who dutifully accepts whatever diagnosis or prescription that is dispensed without question. We seek dialogues, not monologues.

In short, we want to talk to our doctors.