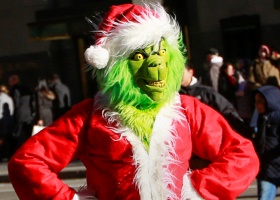 Drugmakers received not what they wanted

And not what they needed,

At the top of that list, and repeated quite often,

Was a gift to undo the threat to their patents

From that monster of monsters, the IPR Grinch.

with no help in sight, no relief from a mensch.

Second in line, but no less desired,

Was prayer for relief

From a CMS mire.

Part B biosimilars must not – no, they must NOT  –

Be reimbursed by this ill-conceived plot.

Despite the loud voices, and the many demands,

We’re not backing down.

Besides, there’s only one

Biosimilar in all of the town.”

“Where are the guidances the FDA promised –

On labeling, switching and extrapolating?

We’ve a market to create. We’re in a crisis.

How much longer will we be waiting?

“Yes, there was one, albeit a draft,

But it was not to our liking. No, it was NOT.

While it has problems aplenty, on this we agree:

Biosimilar names mustn’t be meaningless, too long or too strange.

This guidance is in need of some definite change.”

Were requests for much-needed tax reforms.

So to keep what they make and profit more freely,

Drugmakers moved across the wide sea. Twas only in name,

And out of frustration with the same-old, same-old IRS game.

And the gifts unreceived.

May much more be achieved.