Scientists don’t do politics … until now 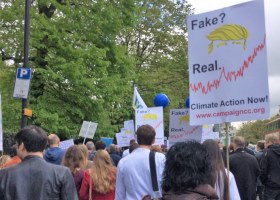 LONDON – It was great to be one of the thousands around the world who took to the streets on Saturday to March for Science.

In London, people of all ages gathered outside the Science Museum, in high spirits, but serious of purpose, with placards ranging from thought-provoking to profound and onto outright comic.

A demure woman belied the eye ‑ and the popular image ‑ with a placard declaring herself to be a “Mad Scientist;” there were several riffs on the infamous “alternative facts;” and quotes from past science greats, such as the words of the father of microbiology Louis Pasteur, “Science knows no country, because knowledge belongs to humanity and is the torch which illuminates the world.”

Then there were insider jokes, such as, “Do I have a big p value, because I feel insignificant?” and my favorite, “Britain is the Schrödinger's cat of Europe.”

Two Americans in London were wearing knitted pink brain hats; a marcher in a cave man costume twirled a banner that said, “Government gives Neanderthals a bad name,” on one side and “Evolve” on the other.

As the march got underway, Chris Rapley, a former director of the Science Museum and an advisor to vice president Al Gore on climate change, told me that having never taken part in a single such event in his life, this was his third demonstration since the inauguration of President Donald Trump.

Why March for Science?

In my experience, scientists don’t do politics.

So I was taken aback at the American Association for the Advancement of Science (AAAS) annual meeting in Boston this February when so many attendees went all political on me ‑ with no preliminary sounding out or testing the waters ‑ and before drink was taken.

Most people I met barely got over the opening conversational pleasantries before cutting to the chase and expressing disquiet and unease about President Trump’s anti-science posturing.

The tone was set by the AAAS CEO Russ Holt who told the opening press briefing he was, “delighted to be with a group that does not deal in alternative facts.”

In terms of how to respond to the denigration of experts and the slur on the probity of science that so many perceive, Holt pointed to the March for Science as a “spontaneous upsurge of feeling” and pledged to give the support of AAAS.

Fast forward to April 22 and all around the world scientists and their supporters in more than 500 cities in 35 countries took to the streets.

A total of 240 U.S. scientific and academic organizations gave their support to the march.

Sponsors of the event in Boston included Intellia Therapeutics Inc. and Tetraphase Pharmaceuticals Inc. Addressing the Boston rally, Steven Holtzman president and CEO of Decibel Therapeutics Inc., a company developing therapies for hearing loss and tinnitus, said science and its practitioners are under siege. “An assault on science is an assault on the future of the biotechnology industry.”

Pfizer Inc. also got in on the act, with a video proclaiming, “We’re proud to stand behind the Science March.”

The unprecedented demonstration was sparked as a reaction to statements and actions of the Trump administration, ranging from questioning the validity of climate change research and the value of immunisation, to proposed cuts to public research budgets.

But while officially, the U.S. marches were non-political, President Trump made them so, putting out an official statement saying his administration is committed to “rigorous science.”

Marchers in London were keen to stress they were not marching for partisan, political, anti-Trump reasons.

This was reflected in comments by scientists such as Stephen Curry, vice chair of the pressure group Science is Vital and a professor of structural biology at Imperial College London who said, “I think that in these fractious political times when we are facing challenges that are truly global, it has never been more important for scientists to go public.”

Similarly, Nigel Brown, professor emeritus of microbiology at Edinburgh University said, “I [am] marching in a personal capacity as I want to make the case for evidence-based policy.”

In the same vein, Brian Hoskins of the Grantham Institute of Climate Change at Imperial College London said he was, “Marching to emphasise the importance of science and scientific evidence in our future well-being, and the crucial role of international collaboration in science.”

Whereas in the U.S., organizations and societies from across disciplines lent their support to the march, in the U.K. they were notably silent on the issue. Unlike the U.S., the great and the good of the scientific establishment were not there to cheerlead or address the rally when the march reached the Houses of Parliament.

Indeed, in comments before the event, Katherine Mathieson, chief executive of the British Science Association, the counterpart of AAAS, cautioned scientists against being overly self-interested. “If only scientists attend these marches, I worry that would only push a larger wedge between scientists and everyone else,” she said.

In contrast to the U.S., science in the U.K has never had it so good. While Brexit will undoubtedly have an impact, for now public funding is rising and the government is supportive of science in terms of its practice per se, its contribution to the economy and in the importance of scientific evidence for policy making.

As Jon Butterworth, a physicist who was a member of the team that discovered the Higgs Boson, put it, speaking at the rally outside the Houses of Parliament, “Science in the U.K is not very partisan, it is not political, there is a consensus it is a good thing.”

So while marchers in London were there in a show of solidarity with U.S. counterparts, their main purpose was to defend science and its values of objectivity, openness and international collaboration - and its contribution to the common good.

Or as the placards put it:

And, “If you like electricity, indoor plumbing, antibiotics, organ transplants, television, airlines, refrigeration, living past 50, not getting polio, email, air conditioning and clean drinking water – thank science.”
You must login or register in order to post a comment.