How vulnerable is the U.S. biopharma supply if China were to halt exports of active pharmaceutical ingredients (APIs)?

"We cannot assess the extent of U.S. dependence on China," Janet Woodcock, director of the FDA's Center for Drug Evaluation and Research (CDER), said in testimony to a House subcommittee Wednesday. 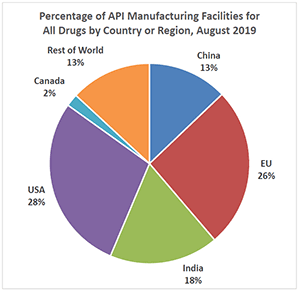 While the agency knows the number and location of facilities manufacturing APIs and finished drugs for the U.S. market, it doesn't "have information about the volume of API being produced in China or even in the United States, or how much of China's API output reaches the U.S. market through other countries," Woodcock told the Energy and Commerce Subcommittee on Health.

The number of manufacturing plants is an easy datapoint, as those facilities must register with the FDA. As of August, 28% of registered API manufacturing facilities were located in the U.S., 26% in the EU, 18% in India and 13% in China. (See chart, right.)

"The number of Chinese facilities producing APIs for the U.S. market has increased over the past decade, as part of a massive movement of pharmaceutical production offshore," Woodcock said, adding that, absent any intervention, the trend is likely to continue.

While 13% may not seem like much, the numbers don't tell the full story of the U.S.'s growing reliance on China as its drugmaker or the risk of that reliance. For instance, the API for three drugs listed by the World Health Organization as essential medicines are manufactured only in China – sulfadiazine, used to treat chancroid and trachoma, and tuberculosis treatments capreomycin and streptomycin.

Rosemary Gibson, another witness at the hearing, testified about the U.S.' growing dependence on China for penicillin and other life-saving antibiotics. The author of China Rx: Exposing the Risks of America's Dependence on China for Medicine, Gibson related how, in 2004, a cartel of Chinese companies dumped penicillin API on the global market at extremely low prices, forcing the closure of the last penicillin fermentation plants in the U.S., the EU and India.

"After four years, when China gained a chokehold on global supply, the Chinese cartel increased prices dramatically," Gibson said. "This is China's playbook: drive U.S. and other manufacturers out of business by selling below manufacturing cost for several years and then raising prices when its domestic companies achieve global dominance."

As a result of such tactics, the U.S. "has lost virtually all of its other antibiotic raw material production capability. Mothers who give their children generic antibiotics for ear infections, seniors who take generic antibiotics for pneumonia and patients in the hospital with life-threatening sepsis are likely dependent on the mercy of China to supply core components," Gibson said in her written testimony.

In opening the hearing, Rep. Anna Eshoo (D-Calif.), chair of the subcommittee, warned of the consequences of such dependence. "If tensions with China escalate, Beijing could use U.S. dependence for critical drugs as an economic weapon and exploit the health and safety of our armed forces and the American public," she said. "This is a threat to our nation's security."

Earlier this month, Reps. John Garamendi (D-Calif.) and Vicky Hartzler (R-Mo.) introduced the Pharmaceutical Independence Long-Term Readiness Reform Act, H.R. 4710, to require the Department of Defense to identify the vulnerabilities created by the U.S. dependence on APIs and finished drugs produced in China.

The bill also would require the Defense Department to only purchase American-made APIs, medicines and vaccines for the military. "Right now, China has the ability to attack the United States without firing a single shot by poisoning our servicemembers' medicines or cutting off their supply," Garamendi said.

Quality concerns can lead to U.S. drug shortages and recalls. In a memo ahead of the hearing, Energy and Commerce Chair Frank Pallone (D-N.J.) referenced the recent recalls of angiotensin II receptor blockers (ARBs) and ranitidine-containing drugs due to concerns about N-nitrosodimethylamine (NDMA) impurities.

The impurities in the ARBs resulted from a change in a solvent the API manufacturer used. Pallone said the manufacturer had testing information confirming the presence of the NDMA, but it omitted those tests from its official reports. "As is the case with many products on the market, the manufacturer of both the ingredient that caused the problem and the final product is located in China," Pallone added.

His solution? "We . . . need to ensure that manufacturers are still incentivized to produce their pharmaceutical ingredients and products domestically," Pallone said. Toward that end, he introduced a bipartisan bill earlier this week to foster the development of emerging continuous manufacturing technologies by expanding opportunities for the FDA to partner with universities across the country that are leading in those efforts.

Woodcock agreed that by investing in advanced manufacturing technologies, including continuous manufacturing, the U.S. could reduce its dependence on foreign sources of APIs and drugs, increase the resilience of the domestic manufacturing base, and reduce quality issues that trigger drug shortages and recalls.

To help with that effort, the FDA is implementing necessary changes in its regulatory structure, which was developed based on traditional batch manufacturing methods. CDER also is working with the Biomedical Advanced Research and Development Authority on a strategy and regulatory framework to develop miniature mobile manufacturing platforms that could produce essential drugs near or at the point of care, Woodcock said.