Researchers at the University at Buffalo and the University of North Carolina have developed an improved antidote for acetaminophen overdoses. Acetaminophen is the active ingredient in Tylenol, paracetamol and multiple generic versions, one of the most frequently used over-the-counter painkillers, and responsible for roughly half of all cases of drug-induced acute liver failure in the U.S. Acetaminophen-induced liver damage is driven by the transcription factor HMGB1, a damage-associated molecular pattern (DAMP) protein. The researchers investigated whether heparan sulfate, a sulfated sugar molecule, could bind to and inhibit HMGB1 activity, as many DAMPs bind heparan sulfate. They found that a specific form of heparan sulfate, heparan sulfate octadecasaccharide (18-mer-HP or hepatoprotective 18-mer), targeted HMGB1 and prevented its signaling. The team also compared the effects of 18-mer-HP to N-acetyl cysteine, the current standard of care for acetaminophen/paracetamol (APAP) overdose, and “demonstrated that 18-mer-HP administered 3 hours after a lethal dose of APAP is fully protective; however, the treatment of N-acetyl cysteine loses protection.” They concluded that “18-mer-HP may offer a potential therapeutic advantage over N-acetyl cysteine for late-presenting patients.” Their work appeared in the March 18, 2020, issue of Science Translational Medicine.

Scientists at the University of Lausanne have identified a link between mitochondrial hyperactivity, GABA sequestration, and the social impairment that is a part of many neurodevelopmental disorders where synaptic functioning is impaired. Mitochondria are cellular energy generators, making them extremely important for the brain, which uses energy far out of proportion to its size. However, mitochondria also have a role in processes more directly related to neuronal signaling, such as calcium buffering, and there is evidence that mitochondrial dysfunction is present in multiple neurodevelopmental disorders, including autism spectrum disorders and schizophrenia. In their experiments, which used the fruit fly drosophila as a model system, the team demonstrated that animals with only one copy of CYFIP1 had reduced GABA signaling because they sequestered GABA in their mitochondria via a transport protein called Aralar. Such animals also had behavioral deficits in both food competition and courtship. The authors reported their findings in the March 19, 2020, issue of Cell.

Researchers at the University of California at Berkeley have demonstrated that cyclic dinucleotides, which are immune-stimulating agents that activate the immune sensing pathway cyclic guanosine monophosphate-adenosine monophosphate synthase-stimulator of interferon genes (cGAS-STING), could be used to stimulate natural killer (NK) cells and activate antitumor immune responses that were independent of CD8 T cells. Antitumor immune approaches have largely focused on T cells to date, but tumors can hide from T cells, either because they do not have a high neoantigen load or because they lose expression of MHC molecules that present antigens. NK cells are activated by an array of surface proteins that are indicative of stressed cell state. In their experiments, the authors showed that CDNs, which are in clinical trials for T cell-based antitumor immune responses, could set off “natural killer (NK) cell-mediated tumor rejection in numerous tumor models, independent of [CD8] T cells…. Therapeutics that activate NK cells, such as CDNs, checkpoint inhibitors, NK cell engagers, and cytokines, may represent next-generation approaches to cancer immunotherapy.” They published their experiments in the March 20, 2020, issue of Science Immunology. 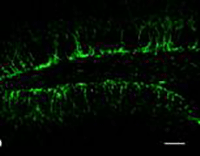 Investigators at Pennsylvania State University and Children’s National Hospital have linked the calcium-activated potassium channel Kcnn2 to learning deficits in an animal model of fetal alcohol spectrum disorders (FASD). Exposure to many toxins in utero can increase the risk of intellectual disabilities, with alcohol being one major such toxin. FASD symptoms include cognitive as well as motor learning deficits, but their molecular underpinnings remain largely unknown. In their study, the authors built on previous work showing that alcohol affected gene expression in neural progenitor cells in the developing brain. In follow-up experiments, they showed that neural progenitors who were affected by alcohol had increased expression of Kcnn2 in motor cortex and that this correlated with motor learning deficits. Furthermore, “pharmacologic blockade of Kcnn2 improves these learning deficits, suggesting Kcnn2 blockers as a new intervention for learning disabilities in FASD.” The team published its results in the March 16, 2020, online issue of Nature Neuroscience.

Tumor necrosis factor-alpha-induced protein 3 (TNFAIP3), or A20, is an anti-inflammatory protein that has been linked to susceptibility to psoriatic arthritis, psoriasis, rheumatoid arthritis, systemic lupus erythematosus, Crohn’s disease and other diseases via genome-wide association studies. Two separate research groups have reported on the functional consequences of single-nucleotide polymorphisms in A20. They showed that mutations in the zinc-finger binding domains 7 (ZfN7) and 4 (ZfN) of A20 interfered with its ability to bind ubiquitin, and that this ubiquitin binding ability was key to A20’s ability to inhibit inflammatory processes driven by NF-kB. The research teams, from the University of California at San Francisco and the VIB Center for Inflammation Research, reported their findings back to back in the March 16, 2020, issue of Nature Immunology.

Investigators at the Joslin Diabetes Institute have identified two members of the fibroblast growth factor family, FGF6 and FGF9, that could induce expression of the Uncoupling protein-1 (UCP1). UCP1 is central to the ability of brown fat to burn rather than store energy, and conversion of white to brown fat is a possible therapeutic strategy for improving energy balance. However, the authors unexpectedly found that FGF6 and FGF9 could induce UCP1 expression independently of the browning of white fat. Instead, FGF6 and FGF9 signaled through FGF receptor 3 (FGFR3) to control UCP1 expression. In a human cohort, expression of FGF9 and FGFR3 in neck fat was associated with UCP1 expression, and loss of FGF9 impaired energy dissipation. The authors concluded that “these findings add important insights into our understanding of molecular aspects of thermoregulation and will ultimately contribute to the development of therapeutic strategies to combat obesity, type 2 diabetes, and cardiovascular disease.” They reported their findings in the March 17, 2020, issue of Nature Communications.

Scientists at the University of Southern California have used fragment-based screening to identify new melatonin receptor agonists, including several compounds that were selective for melatonin receptor 2 (MT2) over MT1, and others that were able to induce biased signaling, selectively activating one of the two pathways that are activated as a result of G protein activation. Both selective activation and biased signaling could lead to therapeutics that are more potent, less toxic, or both. Melatonin receptors are best known for their role in circadian rhythms, and melatonin itself is sold as a supplement that can be used to induce sleep or fight jetlag. But MT agonists are also approved as atypical antidepressants, and research suggests the MT signaling system may also play a role in pain perception. In their experiments, the team “performed large scale structure-based virtual screening for new ligand chemotypes using recently solved high-resolution 3D crystal structures of agonist-bound MT receptors,” and selected roughly 60 candidates for follow-up testing. Ten of those candidates had submicromolar affinities for MTs. The authors wrote that “with the potential for selective modulation over the melatonin receptor subtype-mediated biology, these novel chemotypes could provide new leads for the development of next-generation treatments for insomnia, pain, sleep and mood-related disorders, type 2 diabetes, and cancer.” Their work appeared in the March 18, 2020, issue of eLifesciences.

By combining human GWAS data with mouse pathway analysis, researchers at the University of Wisconsin have validated Sestrin as a regulator of cholesterol biometabolism. The method they have developed can be used as a general way to identify causal genes that connect GWAS signals to phenotypes. The authors used a multistep procedure that consisted of identifying and replicating lipid metabolism gene expression networks in mice, cross-referencing those networks with human SNPs, prioritizing genes through cross-referencing with additional datasets and initial validation, and thorough characterization of the prioritized validated genes. Using their method, they identified Sestrin as a causal gene for plasma cholesterol levels. “Taken together, our systematic stepwise approach combining mouse and human data highlights the power of cross-species analysis and provides a useful approach for the identification of causal lipid GWAS genes,” the authors wrote. “Moreover, our biochemical validation studies with Sesn1 identify a new gene that functions in feedback regulation of cholesterol biosynthesis.” Their work appeared in the March 19, 2020, issue of Cell Metabolism.

BET on BD1 for cancer, BD2 for inflammation

A team at the Peter MacCallum Research Centre and Glaxosmithkline plc has reported new insights into the relative roles of the first and second bromodomains of Bromo- and Extraterminal Domains (BET) proteins. BET proteins are epigenetic readers, and the specific structural features that allow them to read epigenetic marks is their bromodomains (BDs). BETs have several BDs, but little is known about how the different BDs contribute to overall BET function, and existing BET inhibitors do not usually distinguish between different BDs. The authors developed a set of tool compounds and demonstrated that BD1 was necessary for steady-state gene expression, while both BD1 and BD2 were necessary for rapid changes in gene expression induced by inflammatory stimuli. In disease models, BD1 inhibitors were more effective in cancer, while BD2 inhibitors were better in autoimmune and inflammatory diseases. The team reported its findings in the March 20, 2020, issue of Science.