By Gina Lee
No Comments

HONG KONG – Korean biopharma Celltrion Inc. said it’s halfway through the process of creating a super antibody to reign in the COVID-19 novel coronavirus that has claimed almost 13,000 lives globally.

Celltrion Chairman Jung-Jin Seo said during an online press conference on March 23 that the company is currently selecting therapeutic antibody candidates for a “super antibody” antiviral treatment to attach to and neutralize coronaviruses such as COVID-19. The company is also working on a rapid self-diagnosing test kit that can produce results in 15 to 20 minutes, with a target market launch this summer, according to its press release. The kit will focus on the gene that encodes the surface spike (S) protein; an essential glycoprotein for viral entry into human host cells. Celltrion plans to distribute the kit throughout Europe once it gains a CE mark. The company will also apply for U.S. FDA approval for the product after acquiring relevant data.

Seo said Celltrion has completed what it considers the “most difficult part” of the process, the construction of a 300-antibody library from blood samples collected from recovered patients. The company is looking at human administration trials by the end of July, with Celltrion teams working around the clock to meet the tight deadline.

Screening for secondary candidate antibody groups is now underway, in conjunction with an in vitro neutralization assay using COVID-19-infected cells. The Korea Centers for Disease Control and Prevention (KCDC) and Chungbuk National University are also participating in the neutralization assay.

“I am telling my employees to hang on for three more months,” Seo said. 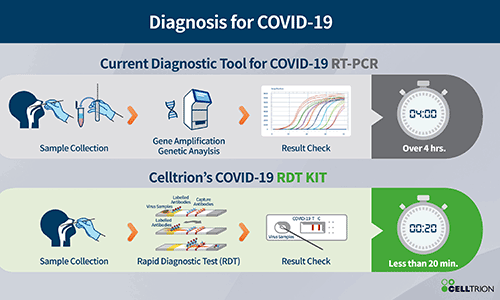 Clinical trials are targeted to begin in four to six months, with six patients already lined up and a seventh to be confirmed either this week or next.

Celltrion was quick in getting the approval from the KCDC to develop a MAb to treat and prevent COVID-19. When South Korea experienced a surge of cases to become the country with the second largest number of cases in the world, the KCDC implemented an emergency search for a cure on Feb. 17. Celltrion applied within the Feb. 27 deadline and was notified that it had won the approval from the KCDC on March 18. Celltrion is one of five companies working on developing a cure for the novel virus. The remaining four are undisclosed American companies – two big-name pharmaceutical firms and two small biotech firms – Seo said but did not elaborate.

According to Kyeong Cheol Park, from the Celltrion PR team, Seo had taken an interest even before the KCDC mandate. “As a company in the biology and chemical fields, we could not help but take an interest,” Park said.

Celltrion plans to work with the four American companies to help in the fight against COVID-19 globally once the Korea’s own problems are sorted out. Even though cost could not be completely taken out of the picture for a biotech company, Seo said the urgent and current need for a treatment outweighs any economic considerations, and his aim is to reach as many patients as possible.

Having dealt with the outbreaks of SARS in 2003 and MERS in 2015, Celltrion also has some valuable experience to draw on when it comes to fighting pandemics.

“We implemented an emergency preparedness plan at the very start of the COVID-19 outbreak, leveraging our unique antibody discovery, development and manufacturing technologies,” Ki-Sung Kwon, head of research and development at Celltrion, said.

Founded by Seo in February 2002, Celltrion produces biosimilars to treat autoimmune diseases and cancer. It went public on the Korean Stock Exchange in August 2003 and counts Singapore’s Temasek Holdings as one of its investors.