After a slow start, bispecific antibody space takes off

Blincyto (blinatumomab, Amgen Inc.), the first FDA-approved bispecific antibody, gained regulatory approval in 2014, but the intervening years have been fairly bleak for bispecific antibodies as companies worked through technical challenges.

"It has some challenges in that it was small, so it's cleared by the kidneys, so it has to be delivered by continuous infusion. And then the second was that it had some manufacturability challenges," Jane Gross, senior vice president and chief scientific officer of Aptevo Therapeutics Inc., said of Blincyto.

Fortunately, those hurdles have been largely overcome, resulting in a plethora of companies developing bispecific antibodies, from large companies such as Amgen, Abbvie Inc. and Regeneron Pharmaceuticals Inc., to a myriad of smaller companies taking a variety of approaches to develop platforms that have allowed them to stock their pipelines full of bispecific antibodies.

"It gets you to new pathways and novel opportunities compared to just single targeting by a monoclonal antibody," Gross said.

Many companies are taking the traditional approach of using bispecific antibodies for T-cell redirection to bring T cells in proximity to tumor cells to attack them, which was popularized by Blincyto and reinforced by the development of CAR T therapies, where a binding protein to target cancer cells is added to T cells, training them to attack the cancer cells.

Thousand Oaks, Calif.-based Amgen is testing a successor to Blincyto with an extended half-life, AMG-562 (CD19 x CD3), in a phase I study of patients with non-Hodgkin lymphoma.

Additional targets are also being tested. Xencor Inc., of Monrovia, Calif., has two tumor T-cell bispecifics in phase I development targeting CD123 for acute myeloid leukemia and CD20 for B-cell tumors. Both bispecifics, vibecotamab and plamotamab, respectively, use CD3 to target the T cell.

And Seattle-based Aptevo has a CD123 x CD3 bispecific called APVO-436 in phase I development. The company also developed ALG.APV-527 in conjunction with Alligator Biosciences AB, of Lund, Sweden, which targets the tumor antigen 5T4 and the co-stimulatory receptor 4-1BB to activate T cells.

Companies have taken different strategies to optimize the manufacturing and half-life of next-generation bispecific antibodies.

Aptevo's Adaptir platform, by contrast, uses a homodimer with an antigen binding domain on the N- and C-terminus of the heavy chain with Fc domains between the two, thus producing a bivalent antibody that has two binding sites for each of the two targets.

IGM Biosciences is taking a completely different approach, using IgM antibodies rather than the traditional IgG. IgM antibodies are a pentamer of immunoglobulins, creating 10 binding sites per molecule. To make a bispecific, IGM Biosciences adds a new different binding domain to the joining chain (J chain), which closes the IgM loop.

"We do a much better of job binding to low cell surface expression targets because with the extra avidity it's like velcro; once it binds, it never lets go," IGM Biosciences CEO Fred Schwarzer told BioWorld.

The 10-to-1 ratio of target to T-cell binders may help IgM antibodies avoid cytokine release syndrome where the activation of the T cells causes a cytokine storm. The large size of the IgM creates a steric hindrance, limiting the density of CD3 molecules that can target the T cell.

Conjugates between tumors and T cells are the low hanging fruit for bispecific antibodies, but the technology offers quite a bit of flexibility to expand into other opportunities with additional targets.

Xencor, for instance, has developed a series of bispecific antibodies where both targets are on the immune cell. XmAb-20717 targets the immune checkpoint receptors PD-1 (PD-1) and CTLA4.

The two sides work together to bind the T cells that have both targets, which are preferentially in the tumor microenvironment, thus limiting the toxicity seen with CTLA4 antibodies.

Xencor is also testing the combination of PD-1 and inducible T-cell costimulator (Icos) as well as CTLA4 with lymphocyte-activation gene 3 (LAG-3).

Aptevo is taking a similar approach, targeting two immune cell targets with its preclinical asset APVO-603, which targets 4-1BB and OX40 to amplify the cytotoxic function of activated T cells and NK cells.

Zymework's lead internal candidate, ZW-25, which is in phase II trials for gastroesophageal adenocarcinomas and breast cancer, doesn't involve the immune system at all, instead binding HER2 in two different places. The antibody binds in trans, so every HER2 molecule is bound by two different antibodies, creating a cluster of inactivated HER2. The company has also developed an antibody-drug conjugate version of the HER2 x HER2 bispecific, which is in phase I development. 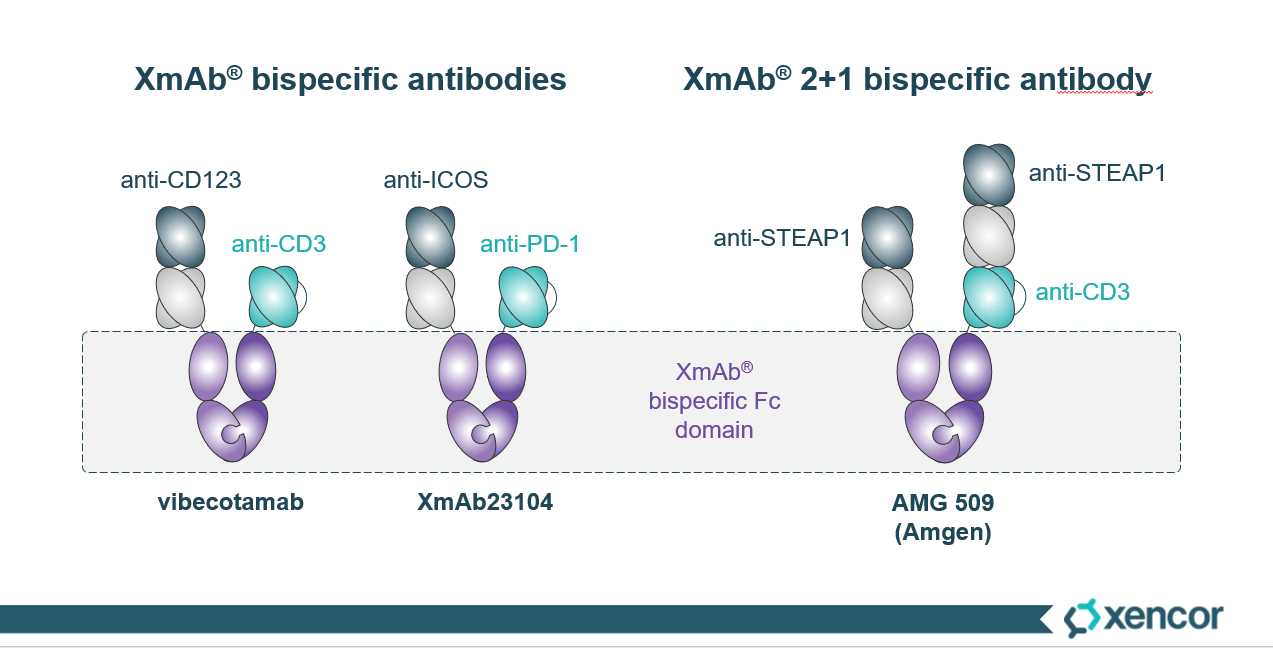 New diseases for cannabinoids: Combinations may be the key