The CDC’s Advisory Committee on Immunization Practices (ACIP) again took up the matter of risk vs. benefit with the COVID-19 vaccine made by Johnson & Johnson (J&J), and proved significantly less skeptical at its second meeting. The FDA and CDC swiftly determined that the recommended pause should be lifted and use of the vaccine should resume.

Johnson & Johnson updated the EUA fact sheets to include information about the diagnosis and treatment of thrombosis with thrombocytopenia. The revised EUA fact sheet is available at: www.janssencovid19vaccine.com.

Distribution of the vaccine from J&J’s Janssen unit was held up after a handful of inoculated people developed thrombosis with thrombocytopenia syndrome (TTS), also known as vaccine-induced prothrombotic immune thrombocytopenia. The product stayed in limbo when ACIP declined to make a recommendation at the end of its first emergency meeting.

Members convened a second session to decide on a path forward with the single-dose, adenovirus-based shot from Whitehouse Station, N.J.-based J&J, known as J&J-78436735 or Ad26.COV2. The reporting rates of TTS with J&J’s vaccine were updated at the second meeting. As of April 21, 15 women and no men had developed the condition. Of these, 13 women were 18-49 years old, two were age 50 or above. 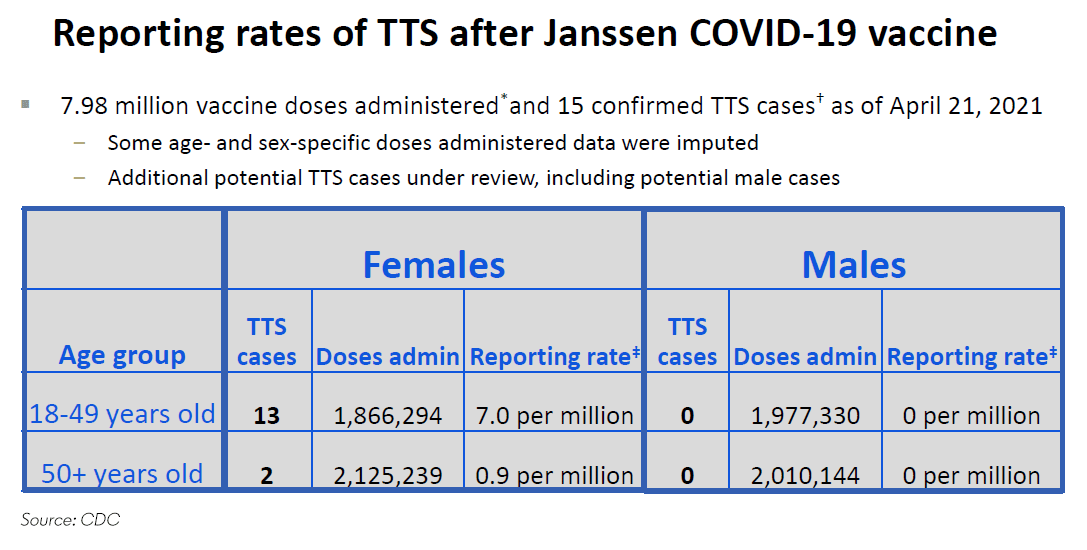 The panel voted on the motion that said, “The Janssen COVID-19 vaccine is recommended for persons 18 years of age and older in the U.S. population under the FDA’s emergency use authorization.” The balloting totaled 10 yes, four no, and one abstention. Overall, benefits were seen to outweigh the risks at the population level. The importance of having available as many vaccines as possible came up often, and the specter of general vaccine hesitancy hovered above the prospect of limiting access to J&J’s product.

Michael Streiff, professor of medicine at Johns Hopkins, said that predicting TTS cases remains challenging, as does improving patients’ outcomes. Although some definite risk factors have surfaced, “we’ve also had patients that were not taking oral contraceptives, or hormonal therapy, were not obese,” he said. “The vast majority have not had any of those associations.” It’s known that TTS affects younger patients and “women more than men, so far, but I don’t think we can just focus on oral contraceptive users or obese patients to exclude them from getting the J&J vaccine or the Astrazeneca vaccine. I don’t think we can do that.”

TTS seems to come about in a way not unlike autoimmune heparin-induced thrombocytopenia, with platelets and the immune system reacting in a complex way, Streiff said. Regarding treatments, “right now we’re stuck with what we have,” he said, “although I think educating doctors to avoid heparin therapy in these patients will improve outcomes.” Also, making patients aware of the main symptoms – severe headache and abdominal pain – will help, he said, pointing to published cases that turned out worse than they probably needed to. “They tried to treat their symptoms at home for a number of days before they presented and when they presented they were severely ill,” he said.

Cowen analyst Joshua Jennings published results of a client poll conducted by his firm ahead of the second ACIP meeting. “Respondents were largely split between a thrombosis safety warning and a gender-based restriction,” he noted in an April 22 report. “Importantly, no one predicted that the vaccine’s EUA will be revoked or that access to it will be eliminated.”

At the first meeting on April 14, ACIP deliberated on the clinical implications of six patients who turned up with cerebral venous sinus thrombosis (CVST) and thrombocytopenia after getting J&J’s vaccine. The panel reviewed patient-level data for all six of the U.S. cases, comparing thrombosis and thrombocytopenia events to the rate associated with London-based Astrazeneca plc’s COVID-19 vaccine (partnered with the University of Oxford) in Europe. Also, the annual incidence of CVST was set alongside the expected number of CVST cases following the J&J shot. (While the J&J vaccine has been authorized in the EU, it has not yet been used there. The Astrazeneca product is still undergoing review in the U.S.)

Cowen’s Jennings called the first panel’s talk “mixed, but the main takeaways included that CVST and thrombocytopenia cases are rare after the J&J vaccine, but occur at a greater rate than expected (a threefold increase or greater) in younger adult females.” Clinical features of the CVST with thrombocytopenia cases after the J&J and Astrazeneca vaccines proved similar, and CVST with thrombocytopenia has not turned up in with the two-shot, mRNA vaccines from New York-based Pfizer Inc. with Biontech SE, of Mainz, Germany, and Moderna Inc., of Cambridge, Mass. Discussion at the first meeting was “more cautious than we expected, and the decision to delay the voting gives us pause,” Jennings said, though he still believed in the aftermath that the halt with the J&J vaccine “was put in place in part to educate the health care community on how to diagnose, treat and report rare cases going forward. We now believe the ACIP is less likely to recommend the J&J vaccine for all adults,” he added, and more likely to advise that young adult females avoid it. Ultimately, members put off a decision pending more data.

With added findings in hand, panelists at the second meeting were able to voice more-direct opinions. ACIP chairperson Jose Romero said the J&J vaccine “can be reinstituted and should be reinstituted,” adding that “these [TTS] events are rare but they are serious,” and the public must be kept informed. “This is not something that we will be able to simply say, ‘We’re following the ACIP recommendation,’” he said. “It is our responsibility as clinicians to make sure that women understand this risk and, when possible, that they have an alternative at the same site where you’re administering the vaccine.”