Is H5N1 Easy to Catch Already? Is That Good News? 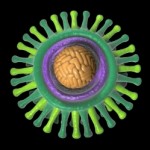 The virus in the 2011 movie Contagion ‑ about a rapidly spreading, highly lethal virus and the panic that ensues ‑ is based partly on the H5N1 bird flu virus. Scientists have lauded Contagion for its scientific accuracy in showing how a highly lethal respiratory virus pandemic might play out.

But the movie’s tag line is also worth keeping in mind: “Nothing spreads like fear.”

Another round of alarming news has brought the real H5N1 back into the headlines in recent weeks. Experimental findings that it only takes a few mutations for the virus to become highly contagious via human-to-human transmission were deemed so dangerous that publication of the experimental details has been delayed, and there is currently a voluntary moratorium on H5N1 research.

But a study published today suggests that H5N1 infections are already more frequent, but milder, than the current WHO data indicates.

But the authors of the new paper, which appears in the Feb. 24, 2012 issue of Science, believe that the WHO’s stringent criteria end up missing most cases of H5N1.

Believe me, I am not trying to sneer at the WHO here. Public health organizations face a difficult task, needing to alert but not unduly alarm the public, encouraging prudence without panic. The WHO walks that line well.

But it is worth noting that the criteria for confirmed H5N1 infections make it unlikely that mild cases of H5N1 will be confirmed in the first place.

The new paper is a meta-analysis of prior studies that looked at serum antibodies to H5N1 as a way to estimate true rates of exposure to the virus. Such antibodies can identify people who have been exposed to H5N1 but are not counted in the WHO tally, because their case was too mild to meet WHO criteria ‑ or for them to seek medical attention at all.

Overall, those numbers tell a very different story than the official 586 cases. The best estimate for rates of exposure were in the range of 1 percent to 2 percent of the population, which, the authors said, would translate into millions of infected individuals.

Figuring out the true death rate is harder still than determining how many people have been infected with H5N1.

Even in the U.S., with its high rates of access to healthcare and mountains of medical records, figuring out how many people get infected with annual flu, and how many die from it, is an imprecise science. For one thing, not everyone with the flu goes to see a doctor. For another, flu deaths are indirect. The virus does its damage by weakening the body, especially the lungs, and the direct cause of death is most often pneumonia.

Such uncertainties are multiplied in the developing areas where new flu strains set out on their annual global trek, and where H5N1 has been circling in its animal reservoirs and popping out every now and then. Just like there appear to be many people who are infected with H5N1 without making it into WHO statistics, so there are undoubtedly people who have died of H5N1 without the medical community’s being any the wiser.

Still, even if the new paper had somehow managed to overestimate the number infections tenfold – which is hard to imagine, given that senior author Peter Palese is an extremely well-respected influenza researcher – then a death rate of nearly 60 percent would mean that there were hundreds of thousands of H5N1 deaths that have somehow gone unnoticed. This seems a lot less likely than the alternative possibility, namely, that H5N1 may not be as deadly as we think.