Home » Blogs » BioWorld Perspectives » A shot in the dark? ‘Flu’ Manchu-type fears of evil pharma, plus frets over strains and safety, keep too many away from vaccine

A shot in the dark? ‘Flu’ Manchu-type fears of evil pharma, plus frets over strains and safety, keep too many away from vaccine 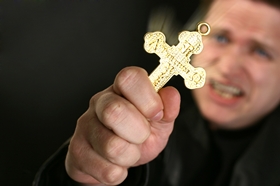 By now I’ve learned to keep my flu shot habit a secret.

Every year about this time, since I was 18 years old, I get vaccinated. But long ago I stopped telling people about it, so I don’t have to hear: “Oh, you know the flu vaccines are made of antifreeze [mercury, aluminum, formaldehyde], right?” or “That’s a crazy thing to do, because the shot itself can make you sick!” or – this one’s fairly new – “You don’t really need it if you’ve got a healthy immune system. Anyway flu shots cause Alzheimer’s [in the old] and autism [in the young].”

I avoid talking about flu shots as carefully as I avoid letting strangers know that my job has anything to do with the pharmaceutical industry. As soon as they find out, they want to argue with me about drug pricing. They make tedious jokes about Viagra, medical pot and these days, nervously, Ebola. They demand to know why “the industry” (it’s a single, uniform entity) is keeping “the cure” for cancer (they think there’s just one cure) a secret. Oh wait! They already know why!

So I’ve been getting the flu shot every year since the afternoon in 1973 when I came home after seeing “The Exorcist,” and collapsed on the floor in the fetal position.  Every muscle in my body ached, as if I had been beaten with telephone books. My skin was hot. I shivered.

This was not the upset stomach that I’ve heard others describe as the “intestinal flu,” or the sniffles that more likely herald the onset of an annoying but relatively harmless cold. This was the real thing. I wanted never to encounter it again. So far, I haven’t.

Today, as the flu-bearing Orthomyxoviridae begin to microbe their insidious ways across the land for the seasonal onslaught, flu shot skeptics – some of them high caliber, like the Johns Hopkins scientist who spoke up last May – are making noise again, and the voice of opposing research is trying to be heard in the mainstream media. The Centers for Disease Control and prevention (CDC) bangs the same drum as always, adjusted for what’s believed to lie ahead.

As of mid-August, according to the CDC, seven flu vaccine makers were projecting that as many as 159 million doses will be available, with about 77 million of those made as quadrivalent shots, protecting against four strains. Of course, it’s a dice game annually as to whether the shots are properly made to protect against the flu varieties coming our way. But it’s a game worth the toss, I think.

So I’m getting in line again to fight the demon. Are you getting a flu shot this year? Consider this as an informal, private survey. I won’t tell anyone.