Sausage, the Law and Jello 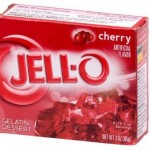 This, in turn, has set the blogosphere abuzz: Is it vegetarian? Cannibalistic? Just plain gross?

Some blogs have compared this to San Francisco company FibroGen Inc., which is making vaccine and biologics stabilizers. But medical uses seem different. I’m not sure what FibroGen intends to put into its gelatin capsules, but what if it’s a recombinant therapeutic protein? Does the yuck factor apply to the capsule, but not the protein? Are you diabetic and grateful for human recombinant insulin? There you go.

One way to get out of this conundrum is the food snob method: declare Jello itself inedible. A more frequent approach than you might think, but the way. During a lovely afternoon at this exhibit at the Massachusetts Museum of Contemporary Art last summer, I heard more than one parent explaining the concept of Jello to their child like this: “Well, you could eat that, but we don’t in our family.” (My heathens, for the record, knew exactly what Jello was long before they encountered arty short films of a Jello San Francisco falling prey to an earthquake/tsunami.)

In the end, this reminds me of the old saying about sausage and the law: those who respect one and like the other should never watch either one being made. The truth is, lots of things are like sausage and the law. Including, it seems, both medication and Jello.