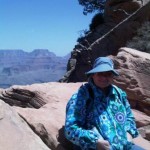 She’s best known as the Biogodess. A biotech insider who can recount the early days in the sector -- when the industry was first starting to attract serious biobucks. The Biogodess has helped many bridge the gap of knowledge between the science and business of this Wild West of the pharmaceutical industry. She’s tracked the sector’s roller coaster ride like few others. In the early days of the male-dominated industry, it was pretty easy to spot her in a crowd. Not just because she was a woman, but because she had a bright and effervescent fashion sense in a sea of dark suits. And a serious thing going on with knock-out shoes.

Over the years, the Biogodess has advised international venture capital firms, helped to establish biotech companies, wrote two books (Alternative Careers in Science: Leaving the Ivory Tower and From Alchemy To IPO: The Business Of Biotechnology) and much more. She’s a biotech veteran who helped nurture the industry from a variety of angles.

AKA Cynthia Robbins-Roth, the Biogodess has also been a BioWorld Today columnist (Fun With Finances), author of BioWorld Perspectives’ “All My Clones” soap opera (along with some longtime, anonymous collaborators) and BioWorld Bytes – Cranky Commentary. She’s been a key figure to BioWorld for almost two decades.

BioWorld’s publisher, Donald R. Johnston, told me that when our company began due diligence to acquire BioWorld from Io Publishing Inc. in 1994, Cindy promptly called him with a lunch invitation during his first visit to the San Mateo, Calif. office. Cindy was BioWorld’s founding editor in chief, but by that time, she had already moved back to the businesses she started in 1986: BioVenture Publishing and BioVenture Consultants. Don and Cindy have been great friends ever since.

The former Genentech Inc. scientist has had an amazing career and, although we’ve published the last episode of “All My Clones” and are discontinuing BioWorld Bytes (in part because of the buzz created by this blog), Cindy will remain on board to provide us with her lively insight assessing quarterly private biotech financings in her Fun With Finances column. And maybe more?

Though she continues her biotech consulting and writing, Cindy had a life-changing experience a decade ago. She survived a plane crash, which sent her in a different career direction. She’s now occupied as a family partner at Edgewood Center’s Turning Point Program, in California, working with young adults facing the challenges of serious mental health disabilities, and their families. Three cheers for the Biogodess for taking on such a commendable challenge, particularly in a state with no money!

So, rather than a quick editor’s note to let you know that we are retiring those two columns, I wanted to take the opportunity to pay tribute to this woman who was and remains so important to BioWorld. She’s a true biotech icon. Thank you, Cindy.