Is it finally their time? Two ADCs for cancer make the blockbuster list

Two of three oncology drugs selected for blockbuster status in the Cortellis Drugs to Watch analysis are antibody-drug conjugates (ADCs), highly targeted cancer therapies designed to leave the healthy cells be and zap the bad ones. What once was a dead end for development has morphed into a competitive space with 57 ADC candidates for cancer indications in phase I or later trials, according to Cortellis.

In the three years since an ADC gained approval, only four have reached the market. Finding the right balance between toxicity and efficacy has baffled developers. Of the three oncology drugs on the Drugs to Watch blockbuster list, two are ADCs but only one is FDA approved.

Astrazeneca plc’s and Daiichi Sankyo Co. Ltd.’s Enhertu (fam-trastuzumab deruxtecan-nxki) was an FDA approval preemie: the ADC arrived months ahead of schedule in December 2019 and launched in the U.S. in January. It’s approved as a monotherapy for treating unresectable or metastatic HER2-positive breast cancer after two or more prior anti-HER2-based regimens in the metastatic setting, targeting the most common form of cancer in women around the world. Of the 1.7 million patients diagnosed annually, between 4% and 10% will develop metastatic, incurable forms. About one in five breast cancers are HER2-positive and so far, there is no cure. 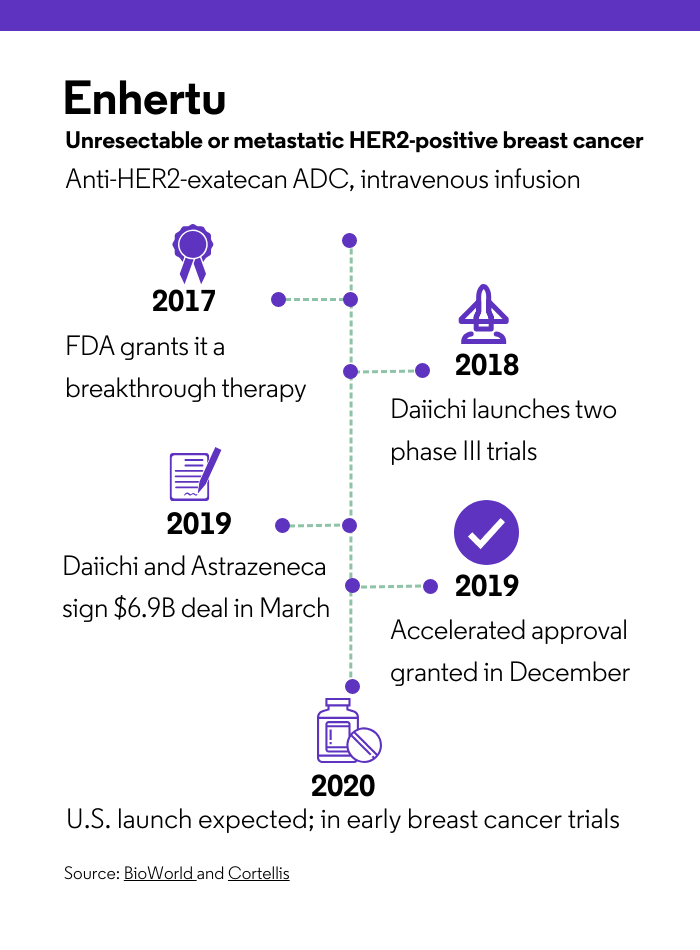 This ADC can go high or it can go low for treating high-expressing HER2 tumor types. It may go beyond breast cancer treatments as gastric, colorectal and non-small-cell cancers are also targets in development.

The accelerated approval came from the phase II Destiny trial that enrolled 184 women with heavily pretreated HER2-positive, unresectable and/or metastatic breast cancer. Those receiving Enhertu had an overall response rate of 60.3% and a median duration of response of 14.8 months. The therapy worked in patients whose previous therapies, Kadcyla (trastuzumab emtansine, Roche Holding AG) and Perjeta (pertuzumab, Roche Holding AG), had failed.

“It’s a relief that there are quite a few companies involved in the HER2 drug space right now,” she told BioWorld, “and many patients are no doubt breathing a lot easier because of the recent Enhertu drug approval.”

Enhertu’s impact is likely to be widespread. HER2 exon 20 insertion mutations comprise 25 cancers affecting men and women, Horn said. Daiichi Sankyo expects to submit for approval in Japan, where Sakigake designation was granted for gastric cancer. Half of all gastric cancer cases occur in eastern Asia. The companies signed a $6.9 billion global collaboration in March 2019 with Daiichi taking exclusive rights in Japan. The partners are looking at filings in other markets as well.

Plenty of money was spent in the quest to make it a blockbuster. Astrazeneca paid Daiichi $1.35 billion up front and pledged as much as $5.55 billion in additional payments to their Japanese partner in the March 2019 deal.

Enhertu has entered a market dominated by Herceptin and other HER2-targeted therapies such as Perjeta and Tykerb (lapatinib, Glaxosmithkline plc), according to the Drugs to Watch analysis. Kadcyla, the only other ADC in that market, is a direct competitor and differentiation vs. that established drug will be key.

To succeed and differentiate itself from competitors, said Joan Tur, Cortellis forecast editor, the drug needs to be approved in earlier breast cancer settings. There are three phase III studies ongoing.

J.P. Morgan analyst Jessica Fye wrote that she sees “Enhertu as setting a high bar in the later-lines of HER2-expressing cancers.”

Cost will vary to the patient’s weight, according to Astrazeneca, but the expected wholesale acquisition price for Enhertu is $13,265.60. The Drugs to Watch analysis said sales of $50.17 million are forecast for this year, rising to $2.02 billion by 2024.

Immunomedics Inc.’s most advanced product candidate is sacituzumab govitecan, an ADC targeting the Trop-2 receptor expressed by many solid cancers and delivering the moderately toxic drug, SN-38, directly to the tumor. The FDA saw sacituzumab govitecan’s promise when it granted breakthrough therapy designation to treat patients with metastatic triple-negative breast cancer (TNBC) who have received two prior therapies for metastatic disease. TNBC is common, amounting to 15% to 20% of breast cancers. 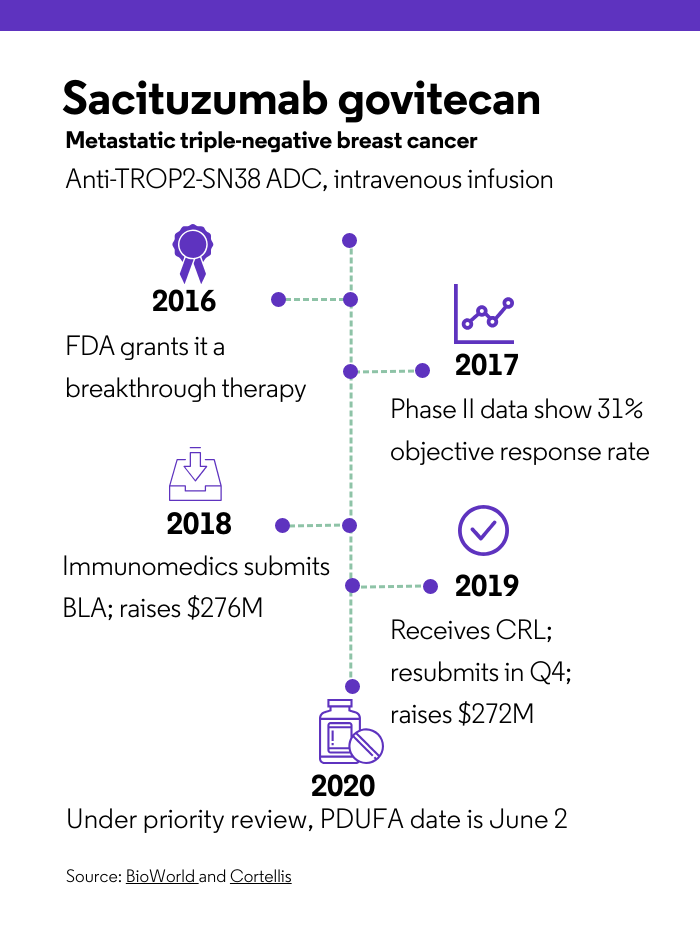 In December, the FDA accepted the resubmission of BLA seeking accelerated approval for sacituzumab govitecan (IMMU-132). After a priority review, a PDUFA date of June 2, 2020, was set.

The filing is based on data from a phase I/II study of 110 patients with relapsed/refractory third-line metastatic TNBC. Sacituzumab govitecan showed impressive efficacy, Tur noted, with an objective response rate (ORR) of 31% by blinded independent review, including six complete responses (CRs) and 28 partial responses (PRs), and an ORR of 34% by local assessment, including three CRs and 34 PRs. In patients receiving prior checkpoint inhibitors, the ORR was 47%.

It has a bright and profitable future, according to the Drugs to Watch analysis. Due to the lack of optimal targeted therapies and the modest efficacy of chemotherapy, it has the potential to be broadly adopted and become the standard of care for TNBC.

Should it be approved, $45 million in sales are forecast for this year, dramatically rising to $1.27 billion in 2024.

To help pay for its development, Morris Plains, N.J.-based Immunomedics raised about $272 million in a December public offering, with net proceeds primarily to accelerate U.S. commercial launch readiness of sacituzumab govitecan in metastatic TNBC while expanding the candidate’s development programs.

Broadening the potential market by moving into earlier-stage disease also is a key part of the plan. For example, Immunomedics will collaborate with Roche Holding AG, of Basel, Switzerland, to evaluate the safety and efficacy of the combination of Tecentriq (atezolizumab), a PD-L1-blocking checkpoint inhibitor, and sacituzumab govitecan as a front-line treatment of patients with metastatic or inoperable locally advanced TNBC. The open-label, randomized phase Ib/II study will be conducted as part of Morpheus, Roche's cancer immunotherapy development platform. Plus, Immunomedics and GBG Forschungs-GmbH, of Neu-Isenburg, Germany, will develop sacituzumab govitecan as a treatment for newly diagnosed breast cancer patients who do not achieve a pathological complete response following standard neoadjuvant therapy in the phase III Sascia study for about 1,200 high-risk patients. 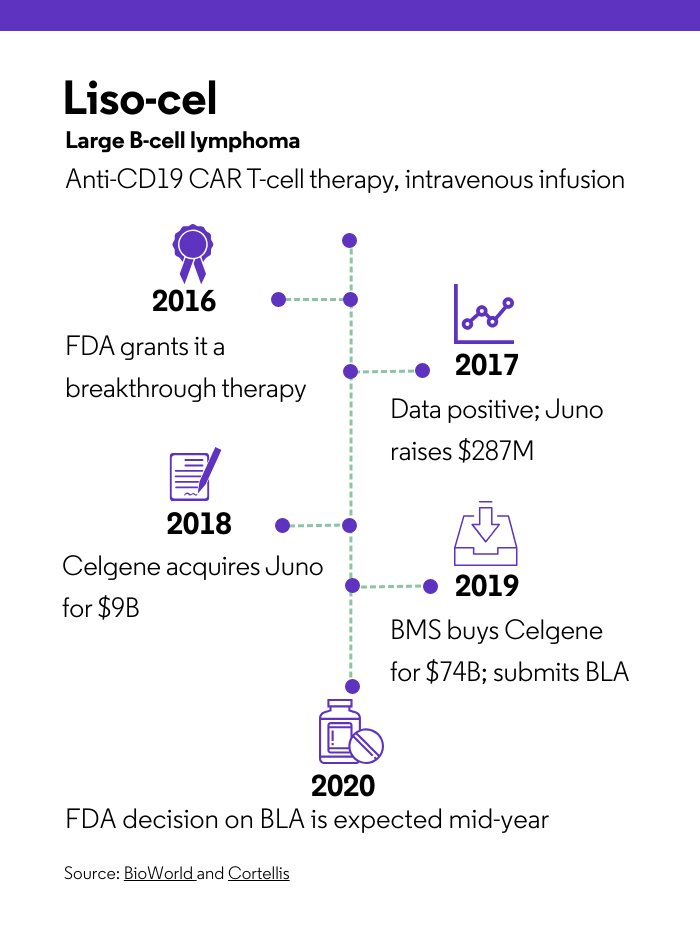 In December, BMS submitted a BLA for treating adult patients with relapsed or refractory large B-cell lymphoma after at least two prior therapies.

Gilead Science Inc.’s Yescarta (axicabtagene ciloleucel) was the first DLBCL CAR T-cell approved for treating relapsed or refractory DLBCL, getting the nod in October 2017. Then along came Novartis’ Kymriah (tisagenlecleucel), which was approved for relapsed or refractory large B-cell lymphoma after two or more lines of systemic therapy in May 2018.

Even if liso-cel could better Kymriah and Yescarta, there are additional challenges that every new CAR T-cell therapy must face. “These include the feasibility of large-scale manufacturing of such personalized therapies, the unknowns of the CAR design itself (e.g., length of construct, choice of hinge region, location of target epitope and choice of costimulatory molecule, which may affect safety and long-term remission), the lack of harmonization across the regulatory landscape, and the potentially prohibitive cost for many payers,” Tur said. “In the longer term, autologous CAR T cells incorporating novel approaches to limit graft-versus-host disease may also reach the market and become a serious competitive threat.”

Manufacturing is one of the largest obstacles in the way of a CAR T-cell therapy gaining traction. Because of liso-cel’s special blend of T cells, the task of purifying them in the manufacturing process is complex, Lee Greenberger, the Leukemia and Lymphoma Society’s chief scientific officer, told BioWorld.

“The off-the-shelf version still has a way to go,” Greenberger said. “Who knows, maybe in one to five years, we’ll see how it compares.”

Greenberger noted that liso-cel has a response rate that looks like the two currently approved products “but looks to be safer.” The caveat when comparing efficacy and safety is that it’s not being done head to head, he added.

Liso-cel can potentially be the best-in-class anti-CD19 based on its differentiated profile compared with other cell therapies, Tur said.

“The therapy is manufactured in a defined 1-to-1 ratio of CD4-positive helper T cells and CD8-positive cytotoxic T cells,” he said. “This composition could confer efficacy and safety advantages, including fewer adverse effects such as cytokine release syndrome and neurotoxicity, which are very common with other CAR T-cell therapies.”