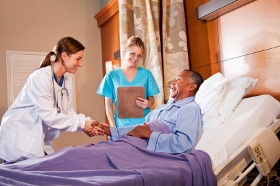 Patients getting their four minutes to say how an experimental drug changed their life or gave them hope have become a routine part of nearly every FDA advisory committee meeting – as routine as the call to order or the conflict of interest statement. And as routine as the adcom moving on with little regard for what they’ve said.

The public hearing speakers, along with the usually silent patient member of the panel, seem to have one function – to let the FDA check off the box for patient involvement. But patients with orphan diseases and their families deserve more than token involvement.

After all, those patients voluntarily took what could be life-threatening risks to participate in a clinical trial. And even though a sponsor may be paying for their travel to be at the hearing, the patients and their families are freely giving their time in the hope that their voices will be heard and weighed by the members of the adcom and the FDA staff, all of whom are paid to sit through the meeting.

So why do they bother to speak up? The patients are there because they want to have a say in what clinical trial endpoints really matter and what risks are acceptable. They want their first-hand experience with a disease and potential treatments to make a difference for others who may face the same challenges in the future. And they want to ensure that the doctors who are on the front lines of treating the diseases are being heard in the regulatory process.

Instead, the patients are greeted with polite smiles and their words are dismissed as soon as they’re spoken. And the doctors are disregarded as “conflicted” because they participated in the trials. “It was so disheartening,” Dena Battle said of her first experience of testifying before an adcom. “We were sort of dismissed as just emotional anecdotes.”

Both Dena and her husband, Chris Battle, who is fighting kidney cancer, spoke in favor of approval of AVEO Oncology Inc.'s tivozanib as a treatment for renal cell cancer. Unswayed by the patients’ experience, the advisory committee spent the rest of the session scolding AVEO for its trial design.

While some mistakes may have been made with the trial, Dena said the meeting would have been much more productive had the committee – comprised of biostatisticians, breast cancer specialists, hematologists, a pediatric oncologist and a prostate cancer specialist – engaged in a thoughtful discussion with the renal specialists in the room about how AVEO should proceed with the RCC indication. Instead, “the doctors that know most about this disease . . . were all shut down,” Dena told BioWorld.

As a result, the only vote in support of the drug came from patient representative Dan Lumley. Now AVEO is facing shareholder lawsuits, and its partner Astellas Pharma Inc. has pulled out of the RCC development of the drug. While tivozanib is still being developed for breast cancer, it’s unlikely the drug will be developed for RCC, even though it showed promise in the orphan disease.

Over the next few years, the FDA is likely to devote considerable time and resources in figuring out how to implement the FDA Safety and Innovation Act provisions requiring patient involvement in the drug approval process. The first step is a no brainer: Actually listen to the patients who are trying to live with the disease. Step 2: Consult with the doctors who are the specialists in dealing with the orphan disease.