By Katie Pfaff
No Comments 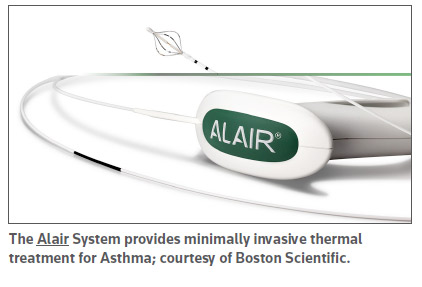 The study indicated patients who relied on inhaled corticosteroids and long-acting beta-agonists as well as other medications to manage their asthma would benefit from the minimally invasive thermal treatment.

Approved in 2010, the Alair system uses a series of as many as three 10-second, controlled radiofrequency thermal treatments to heat the tissue and minimize the smooth muscle of the airway, effectively increasing airflow by reducing the ability of asthma to constrict the airway.

Asthma is an inflammatory condition causing the bronchial tubes to swell, and is estimated to impact 25 million patients, 10 percent of whom experience severe symptoms, according to the American Academy of Allergy, Asthma & Immunology's Journal of Allergy and Clinical Immunology.

Alair is intended for patients who have experienced severe disease complications, and are unable to control their symptoms with long-acting beta-agonists or inhaled corticosteroids. Alair treatment can be achieved without full sedation; the device is inserted via bronchoscope through the nose, and patients can be released the same day.

Following its early 2010 FDA-approval (See Medical Device Daily, April 29, 2010), the device-maker Asthmatx, of Sunnyvale, Calif., was purchased by Boston Scientific for an initial cash payment of $193.5 million, with possible additional payments of up to $250 million, contingent upon revenue targets through 2019. (See Medical Device Daily Sept. 21, 2001.) At that time, the device was touted as the first of its kind, and remains the "first non-pharmacologic, device-based treatment for severe, persistent asthma," according to Boston Scientific.

"Currently, we are focused on increasing awareness among both patients and physicians about severe asthma and BT as an established treatment option," a company spokesperson shared with Medical Device Daily. "We are partnering with Richard Jefferson, a world champion professional basketball player [who] was treated with BT, to share his story. We are also actively working with physicians and payors to increase their body of knowledge about BT and patient selection."

The PAS2 study enrolled 284 patients across 27 centers in the U.S. and Canada who had poorly controlled asthma with inhaled corticosteroids and long-acting beta-agonists (mean usage among participants was 2275 µg/day), and also often turned to maintenance medications such as oral corticosteroids (19.4 percent of cohorts utilized) and biologics (15.8 percent utilized omalizumab). In the year prior to the enrollees treatment with Alair, 78 percent experienced at least one asthma exacerbation, 16 percent were hospitalized, and 29 percent admitted to the ER. The participants' average age was 45.7 years old, and 64.5 percent were female.

Once the trial began, 279 underwent at least one BT procedure, and 271 received three procedures. In the 12 months following up, exacerbations were significantly reduced: 50.6 percent had severe events, 14.4 percent were hospitalized, and 18.3 percent were in the ER for asthma-related symptoms. In the second year, results remained positive with 45.4 percent experiencing an exacerbating event, 12.7 percent hospitalized, and 13.5 percent visiting the ER.

Study data reported patients were able to take oral corticosteroids less often after treatment; those taking the medications dropped from 19.4 percent to 11.8 percent.

"The findings of the PAS2 study provide important real-world evidence that patients with poorly controlled severe asthma on high doses of medications, including biologics, experience significant and sustained improvements in asthma control following BT," said Chupp. "On average, patients also reduced their inhaled corticosteroid dose and a significant number were able to discontinue maintenance oral corticosteroids. BT offers an alternative approach for patients who are inadequately controlled with medications designed to improve the control of their asthma."

Participants will continue to be monitored for five years. The PAS2 study follows an earlier Asthma Intervention Research 2 (AIR2) trial with positive results in reduction of severe asthma exacerbation, such as ER treatment and hospitalizations.