Not lost in translation, Verseau bid with MCMs garners $50M

CEO Christine Bunt of Verseau Therapeutics Inc. told BioWorld that the company has prepared a "wave" of prospects from its macrophage checkpoint modulator (MCM) platform ready to crash upon the shores of cancer therapy, with 23 novel targets in the hopper.

The Bedford, Mass.-based firm, founded in 2017, emerged from stealth mode Monday with a $50 million financing to boost its program with P-selectin glycoprotein ligand-1 (PSGL-1), identified in the lead MCM push. PSGL-1 is an adhesion molecule involved in immune cell trafficking in response to tissue injury or inflammation. Verseau discovered that modulation of PSGL-1 can lead to macrophage reprogramming, too.

"We believe there is a large patient population that is underserved right now," said Bunt, whose background includes time at Merck & Co. Inc., of Kenilworth, N.J., and Basel, Switzerland-based Roche Holding AG. "T cell-targeting therapies, to be honest, are great. Look at the clinical data with PD-1s. They're fantastic for patients, but T-cell infiltration in all human cancer is only 25 percent. Macrophage infiltration is 75 percent."

The company works with patient-derived tumors plus genomic and computational data to get the most from a delivery technology licensed from the laboratories of Bob Langer and Dan Anderson at the Massachusetts Institute of Technology (MIT), co-founders of the company who sit on the board. Verseau's "all-human translational system is important in oncology," she noted. "We've cured a lot cancer in mice." 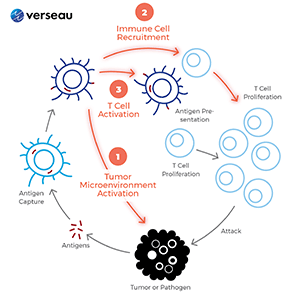 The library includes more than 150 patient tumors with several thousand groups analyzed in dishes, testing Verseau's candidates with such market leaders as Merck's Keytruda (pembrolizumab). But the MIT delivery system is what sets the firm apart from others doing such tissue tests. Verseau has licensed siRNA delivery technology, a lipid nanoparticle, from the MIT laboratories.

"When you're in [an asset-rich] position early on, you have to ask yourself the question, 'How can we take a broader pipeline forward? What else can we do to turbocharge development?'" Bunt said. Verseau's answer was the deal with 3Sbio Inc., of Shenyang, China. Signed in February of this year, the partnership focuses on the development and commercialization of monoclonal antibodies in the field of immuno-oncology (I-O) for a broad range of cancers. 3Sbio gained an exclusive license to develop and commercialize a select number of MCM antibodies for all human oncology indications in greater China, including mainland China, Taiwan, Hong Kong and Macau. Verseau is responsible for discovery and optimization of MCM antibodies for each program and 3Sbio will fund and conduct antibody development, GMP manufacturing and commercialization in the territory. Verseau and 3SBio will be eligible to receive certain milestone payments and royalties on product sales both in the territory and globally. As part of the arrangement, 3Sbio bought $15 million of Verseau's series B preferred stock. She called the tie-up with 3Sbio "a meeting of skill sets and mission" that was especially attractive to Verseau because of the 2018 regulatory change that allows parallel efforts with FDAs in China and the U.S. (See BioWorld, Feb. 15, 2019.)

Disclosing the company's first target right away is "a little bold," Bunt allowed, though efforts with PSGL-1 have been ongoing for a while by big pharma firms. Such work mostly takes aim at inflammatory conditions. "There are early reports that it has been looked at in the context of cancer but we don't have details on that," she said. PSGL-1 "really puts the brakes on the immune system," and attacking it may mean good things for beating back cancer as well. Verseau's approach can "open the doors for T-cell activation, bringing new immune cells to the disease site, and turning the tumor microenvironment highly inflammatory. That's a novel discovery."

Bunt said it was "very important for us that MCMs can stand on their own feet, and we demonstrated that in many cancers. Do we see combination benefit with current PD-1 inhibitors? Yes, we do," and the firm may pursue more commercialization partners down the road. "If partners want to come early on and there are some strategic synergies, we would be open to that, but we are planning to take several programs through the clinic and we are well-positioned," she said, predicting at least one program per year will enter testing. "Obviously, we have to raise more capital like every private biotech company has to do." Results to roll out next year at oncology conferences "might spark some interest," she said. "We have some pretty convincing data in our patient-derived tumor studies" and others.

Verseau lists 32 employees "and we do expect to grow a lot," Bunt said, noting that recruitment is underway in R&D and business development positions. "In stealth mode, we had to move once already because we grew out of capacity in our lab," she said.

Verseau means "Aquarius" in French, and the moniker was chosen because macrophages change function and shape fluidly. "It's maybe a long shot but everybody liked the name," she said.