Filgotinib looks to JAK up sales with multiple indications 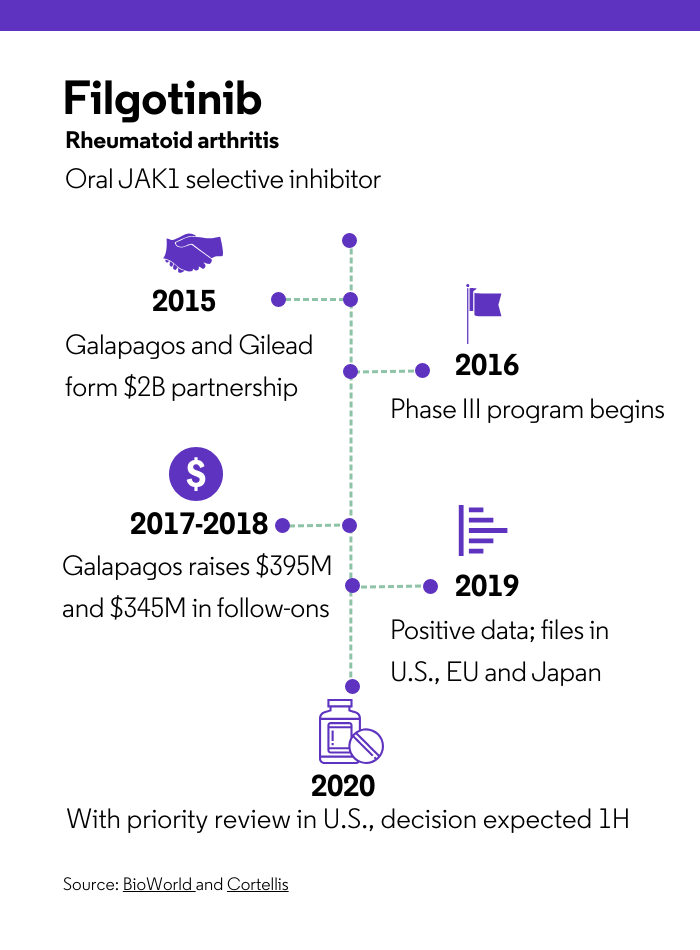 Filgotinib (GLPG-0634) has the potential to be a blockbuster drug, according to Cortellis Drugs to Watch analysis, but it may take a few approvals in various indications to reach the coveted mark of $1 billion in annual sales.

The drug is an oral inhibitor of Janus kinase (JAK) 1; overactivation/dysregulation of JAK1 can lead to autoimmune responses. Filgotinib is currently up for approval as a treatment for rheumatoid arthritis, with marketing applications for the initial indication filed in the EU in August 2019, in Japan in October 2019 and in the U.S. in December 2019. To ensure a quick U.S. decision, Gilead Sciences Inc. used a priority review voucher with the FDA, shortening the review time by four months.

Partners Gilead, Galapagos NV and Eisai Co. Ltd., which will market filgotinib in various regions across the globe, will enter a crowded rheumatoid arthritis market. In addition to nonsteroidal anti-inflammatory drugs, steroids and disease-modifying antirheumatic drugs (DMARDs) such as methotrexate, which are generally available as generics, there are multiple drugs targeting other mechanisms of action, including TNF-alpha inhibitors such as top-selling Humira (adalimumab, Abbvie Inc.), along with Orencia (abatacept, Bristol-Myers Squibb Co.), which prevents the delivery of the co-stimulatory signal to the T cell. There are also interleukin-1 blocker Kineret (anakinra, Sobi Inc.), interleukin-6 antibodies Kevzara (sarilumab, Regeneron Pharmaceuticals Inc. and Sanofi SA) and Actemra (tocilizumab, Roche), anti-CD20 Rituxan (rituximab, Biogen Inc. and Roche Holding AG), as well as multiple other JAK inhibitors, including Xeljanz (tofacitinib, Pfizer Inc.), Olumiant (baricitinib, Eli Lilly and Co.) and Rinvoq (upadacitinib, Abbvie).

"Obviously, we are very well aware that it's going to be a very competitive environment. There's no doubt about that," Johanna Mercier, Gilead's chief commercial officer, noted on the 2019 fourth-quarter conference call.

"This is not a problem that is solved," Kelly O'Neill, president and founder of the Rheumatoid Patient Foundation who also runs the RA Warrior website and has written a book on the disease, told BioWorld. "Even if there's a slight difference from something that we already have, I would advocate for its approval."

O'Neill, who was diagnosed in 2006 after at least 20 years of flaring symptoms and is currently on her second JAK inhibitor treatment, noted that about a third of patients don't have a noticeable response to available therapies, another third have a partial response and the rest have a response, although the efficacy can wane over time.

"Cross-trial comparisons that investors (and physicians) will inevitably make, however, do suggest efficacy across the board - even at the higher dose - looks less impressive vs. Abbvie's further-ahead competitive JAK1 inhibitor, upadacitinib, though filgotinib's safety may be even cleaner," RBC Capital Markets analyst Brian Abrahams wrote in a note to clients after the FINCH 1 and 3 data were released.

Gilead's chief medical officer, Merdad Parsey, stressed the mix of efficacy and safety on the conference call discussing the company's fourth-quarter earnings. "Speaking with key opinion leaders, there is real appreciation for the results and an excitement for the potential combination of efficacy and safety of the selective oral JAK1 inhibitor," Parsey said.

While the safety profile in humans was fairly clean, there were signs of testicular toxicity in preclinical studies. To determine whether the finding applied to humans, filgotinib is being tested in MANTA-1 and -2 testicular toxicity studies with data still pending.

Xeljanz and Olumiant both have black box warnings about deep vein thrombosis (DVT) and pulmonary embolisms (PE) that were seen in their clinical trials. Upadacitinib) appeared to have a cleaner profile in its clinical trials, but the FDA still slapped a black box on the label warning that JAK inhibitors have caused DVT and PE. If filgotinib skirts by without getting a black box warning for DVT/PE, it would help differentiate it from the crowd, but analysts aren't counting on it.

"Expectations are for the same black box warning to be applied to the filgotinib label as it was applied to the upadacitinib label. The view that the U.S. FDA has taken seems to be a class perspective that JAK inhibitors pose an elevated risk for. That said, the clinical evidence from a pooled analysis of the FINCH studies does not support a view that the drug poses an elevated risk for DVT/PE," Raymond James analyst Dane Leone hypothesized in a note to clients.

As an oral medication, filgotinib could have an advantage over biologics that have to be infused, but O'Neill said she sees the convenience as a minor benefit. "The only difference that really would matter to patients is efficacy," she said, noting that the relatively rare patient that responded to both an oral and a biologic would likely prefer the oral medication.

Gilead and Galapagos are also testing filgotinib as a treatment for ulcerative colitis, Crohn's disease, psoriatic arthritis and ankylosing spondylitis, potentially resulting in five approvals over the next four years.

Roche and PTC check off another SMA win, but the devil is in the details