Novartis’ high ‘steaks’ with inclisiran in FH; optimism for Rybelsus in diabetes

The less-frequent dosing regimen of Basel, Switzerland-based Novartis AG’s cholesterol therapy, inclisiran, under development in the hands of subsidiary The Medicines Co., positions the small interfering RNA (siRNA) drug to take on marketed proprotein convertase subtilisin/kexin type 9 (PCSK9)-targeting antibodies as well as statins in the busy therapeutic space. Statins are the gold standard now, but about 80% of patients don’t reach their lipid goals. 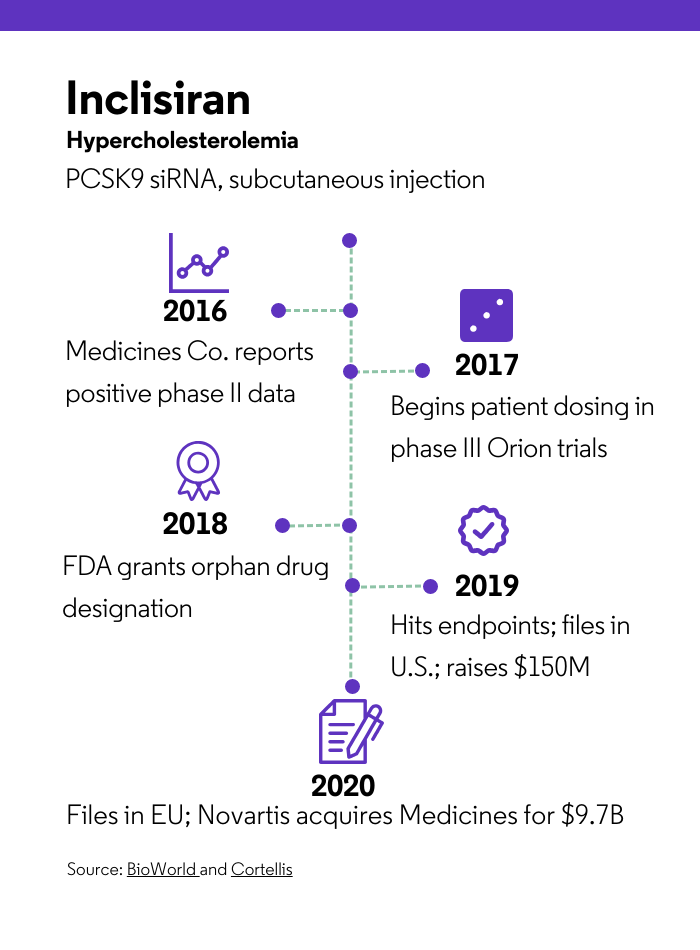 But for familial hypercholesterolemia (FH) patients, the demand for more options – along with more vigilant testing to diagnose the disease early – matters just as much as inclisiran’s dosing schedule if not more, according to Katherine Wilemon, founder and CEO of the FH Foundation, a patient advocacy group. “Physicians, unfortunately, aren’t looking for this condition because there’s a misconception that it’s rare,” she said. If approved, inclisiran will be the first and only cholesterol-lowering siRNA product, with forecast sales of $40.21 million for this year, rising to $1.16 billion by 2024, according to Cortellis Drugs to Watch analysis. In December 2019, an NDA was submitted to the U.S. FDA for use of the subcutaneously injected compound in secondary prevention patients with atherosclerotic cardiovascular disease (ASCVD) and FH.

Filings are based on data from three pivotal hypercholesterolemia trials: Orion-10 (U.S.) and Orion-11 (EU and South Africa) in ASCVD patients, and Orion-9 (U.S., EU and South Africa) in heterozygous FH. In all three studies, inclisiran was dosed on a twice-a-year basis to evaluate the same endpoints (percentage change in LDL cholesterol [LDL-C] from baseline to day 510 and percentage time-adjusted change in baseline from day 90 to day 540). Primary and secondary efficacy endpoints were met for all three trials, showing potent and durable reductions of > 50% in LDL-C on top of standard of care, with an excellent safety profile.

Cortellis’ Drugs to Watch analysis notes that inclisiran might “leverage its competitive profile, with its twice-a-year dosing (which could abrogate compliance issues) combined with similar efficacy to the PCSK9 monoclonal antibodies, to drive patient initiation on inclisiran” ahead of those compounds, which include Repatha (evolocumab) from Amgen Inc., of Thousand Oaks, Calif., and Praluent (alirocumab) from Paris-based Sanofi SA and Regeneron Pharmaceuticals Inc., of Tarrytown, N.Y. Praluent is administered by injection every two weeks. Repatha is given as a shot every two weeks or monthly. Repatha stands as the PCSK9 leader in the U.S., with 66% share of total prescriptions and 75% of new prescriptions.

Amgen is “encouraged by the ex-U.S. uptake and continue[s] to be optimistic on the growth outlook despite flat growth quarter over quarter,” J.P. Morgan analyst Cory Kasimov wrote in a report Jan. 30. 2020.

Inclisiran, dosed at 300 mg, silences the expression of a gene encoding PCSK9, whereas the monoclonal antibodies target the protein directly. Silencing PCSK9 expression means LDL receptors are not degraded and become widely available on the cell surface, resulting in improved ingestion of LDL particles into the liver cells, thus knocking down LDL levels in blood. The siRNA therapy is formulated using a proprietary technology consisting of lipid nanoparticles conjugated with GAlNAc, which is what allows for subcutaneous dosing and exclusive targeting of the liver. In patients with homozygous FH, inclisiran will face competition from drugs such as Kynamro (mipomersen, Sanofi SA) and Juxtapid (lomitapide, Bristol-Myers Squibb Co.) About one per million people worldwide has homozygous FH; about one in 250 globally bear the heterozygous form.

More than 1.3 million people are affected by FH in the U.S., but about 85% go undetected, according to The FH Foundation, a nonprofit group started in 2011. The condition can be found clinically through a blood workup and family history or – as is more common in Europe – by way of genetic testing, though about 30% of people in whom FH is found clinically bear no mutations. Of those diagnosed with FH, about 1% are prescribed PCSK9 inhibitors, Wilemon said.

“We couldn’t have been more enthusiastic and hopeful when [those drugs] came out on the market” but “a variety of challenges” have turned up in getting them prescribed and covered by payers, she told BioWorld. Some people “still aren’t able to achieve their goals with PCSK9 inhibitors” and, although certain patients “do have reservations about giving themselves an injection on a monthly basis,” the appeal of inclisiran is “not about the dosing convenience. It’s really about the fact that there continues to be a need for further lipid-lowering therapy in this population.”

Wilemon, who is living with FH, suffered a heart attack at age 39. That’s when she discovered her oldest daughter has the disease, too. “If we can crack this nut, we’ll be able to prevent a lot of cardiovascular [CV] disease” caused by FH, which is “hiding in plain sight,” she said. “These people are having heart attacks in their 30s, 40s and 50s, [over] multiple generations without it being diagnosed.” Wilemon is “on basically the kitchen sink [of therapies] that’s available” – high-dose statins, ezetimibe (Zetia, Merck & Co. Inc.) and a PCSK9 inhibitor. The regimen plus a heart-healthy diet put her “just barely where I need to be” in terms of LDL-C levels, she said.

“I hope that in the excitement for [inclisiran] to be a blockbuster therapy, the FH population doesn’t get left behind,” Wilemon said. “What we’ve seen is, in the rush for a bigger market, sometimes those of us with the highest unmet need become invisible.” If FH patients had been recognized from the start as the most important users of PCSK9 inhibitors, more would be prescribed today, she said. “Maybe with more and more therapies, the sheer volume of discussion around [FH] will have a gradual impact.”

Regarding CV outcomes with inclisiran, preliminary efficacy data have come from the ORION11 trial and ORION4 is currently ongoing to demonstrate CV benefit, which will be crucial for broad adoption.

Can Rybelsus hit $7.2B sales mark?

Also in the metabolic class in the Cortellis Drugs to Watch analysis is Bagsvaerd, Denmark-based Novo Nordisk A/S' oral once-daily Rybelsus (semaglutide) for type 2 diabetes, approved in September 2019 thanks to a priority review voucher that guaranteed a greased path for the first non-injected GLP-1 receptor protein therapy. Cardiovascular (CV) safety data were added to the drug’s label in January 2020. Additional filings for adults with type 2 diabetes have also been submitted in the EU and Canada. 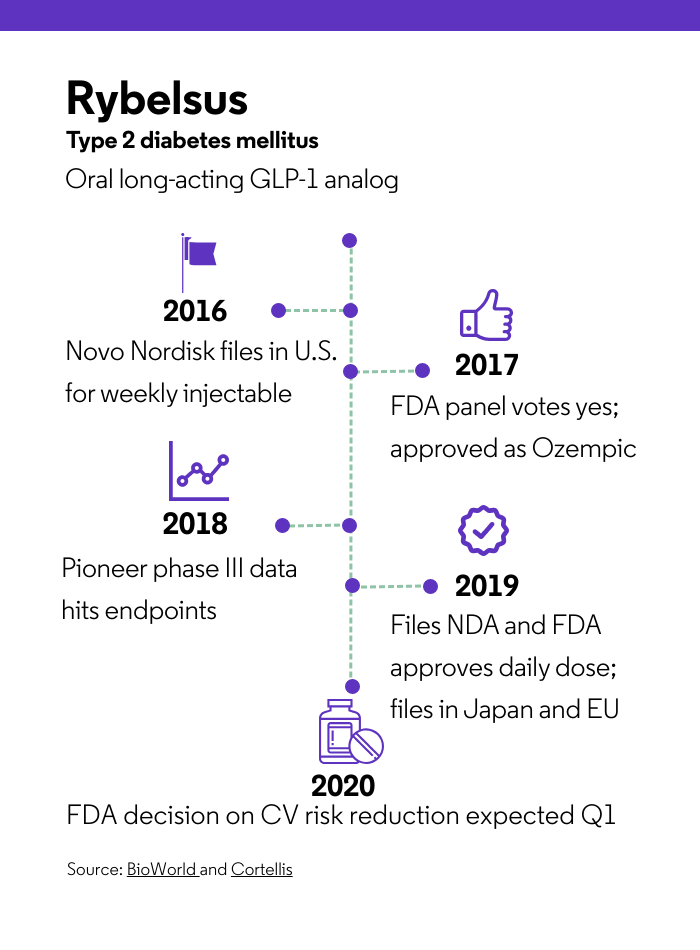 Rybelsus combines the convenience of a once-daily pill with the glucose-lowering activity and the CV benefits of injectable GLP1 agonists, which is seen as the main reason it could radically change the diabetes landscape.

The approval was based on data from the Pioneer program, which included 10 trials involving 9,543 adults. Patients treated with Rybelsus 14 mg achieved greater blood glucose reductions at 26 weeks compared to the DPP4 inhibitor Januvia (sitagliptin, Merck & Co. Inc.), the SGLT2 inhibitor Jardiance (empagliflozin, Boehringer Ingelheim GmbH/Eli Lilly and Co.) and the GLP-1 analogue Victoza (liraglutide, Novo Nordisk A/S). The drug was safe and well-tolerated, with the most common adverse event being nausea. CV risk reduction in the label was based on data from the Pioneer 6 trial, where Rybelsus demonstrated noninferiority to placebo in reducing the risk of the occurrence of a composite major adverse cardiovascular events endpoint, consisting of cardiovascular death, nonfatal heart attack or nonfatal stroke, by 21%.

“Diabetes remains a highly competitive market, with multiple drugs with limited differentiation competing for market share,” the Cortellis analysis noted. “The oral DPP4 inhibitor class, particularly the best-seller Januvia, has built a successful market as add-on to metformin, primarily in the early stages of diabetes.” DPP4 inhibitors have not been able to show CV benefit, a major setback for the class. Other competitors crowd the field, such as SGLT2 inhibitors, which have garnered CV upside. Still, Rybelsus sales of $379 million are forecast for this year, rising to about $3.2 billion by 2024. Jefferies analyst Peter Welford, in a Sept. 23, 2019, report shortly after the FDA cleared Rybelsus, noted that at the European Association for the Study of Diabetes meeting the same month in Barcelona, Spain, “presenters mused whether Rybelsus could increase acceptance of GLP-1s amongst physicians and patients, and change GLP-1 prescribing habits, particularly amongst primary care physicians, and potentially also make GLP-1 use more frequent and bring it earlier in the treatment paradigm.” The “significant interest” shown by attendees of the scientific conference “supports our well-above-consensus $7.2 billion [in estimated] worldwide peak sales,” he said.

Additional filings for Rybelsus in adults with type 2 diabetes have also been submitted in the EU (April 2019), Japan (July 2019) and Canada (April 2019).