Where’s Rube Goldberg When You Need Him? 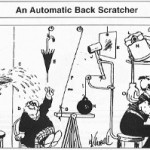 What’s the difference between Congress and a Rube Goldberg contraption?

They both use convoluted processes to accomplish a simple task, but the Goldberg invention still manages to keep the end result pretty simple. And while there may be some unintended consequences with both, they’re not unexpected with the absurd processes of a Goldberg machine. One look shows you what kind of mess you’re going to have if the cracker misses its mark, the parrot misses its perch, the seeds miss the bucket, the cigar lighter misses the fuse . . .

Not so with Congress. By the time all 435 representatives and 100 senators put their stamp on a bill, the legislation is neither simple nor transparent. In fact, the outcome is often so full of ambiguities that even the Supreme Court can’t agree on the meaning. And by time the federal agencies draft rules to implement the provisions of a bill, what started out as a simple, straightforward idea has been transformed into a megalo-regulatory mess that no one can untangle.

Take the crowdfunding provision in the JOBS Act. The simple idea behind it was to allow small companies to raise capital by getting a little bit of money from a lot of everyday people. But the tightly restricted provision that emerged from the convoluted congressional process is so far removed from the original idea that it’s a misnomer to call it crowdfunding. And by time the SEC drafts the rules to implement it, the provision is likely to be so cumbersome that it’s useless.

Even more perplexing is when Congress doesn’t recognize the messes it has created with its well-intentioned but over-engineered legislation. It may see the mess. It may even step in it. But rather than tracing the problem to the cause, Congress instead goes through its drawn-out process of hearings and finger-pointing to develop more legislation and even more regulations.

We’re seeing that with antibiotics. Citing a dearth of new antibiotics and a wealth of scary bacterial and fungal infections that won’t respond to the drugs in our current medicine cabinet, Congress added incentives to the recently passed FDA Safety and Innovation Act (FDASIA) to get drugmakers to make new infection-fighting drugs. But never once did Congress look at the legislative contraptions it has already created to see if they were in any way responsible for this life-threatening problem.

Consider this. Last year, Dificid (fidaxomicin, Optimer Pharmaceuticals Inc.) was the first new Clostridium difficile-fighting drug approved in more than 25 years. Hmmm, more than 25 years. Say, isn’t that when Hatch-Waxman lifted the floodgates for cheap generics? Could there be a Rube Goldberg connection?

Just follow the chain reaction: Hatch-Waxman opens the market to generic copies of old antibiotics. The price of antibiotics goes down, way down. Reimbursement rates are set to reflect the cheaper price of generics. Hospitals buy the cheap generics. Drugmakers stop developing new antibiotics because there’s no market for drugs that cost more than the cheap generics. The pathogens that hang out at hospitals become more and more resistant to the cheap generic versions of antibiotics, many of which have been used for half a century or more. Hospital-acquired infections become a growing threat, with few new drugs to treat them. Congress passes FDASIA to spur the development of innovative antibiotics. That law gives the Department of Health and Human Services two years to develop rules to implement the incentives and come up with a list of pathogens the new drugs must target.

Then the real work begins. And maybe, in another decade or so, we’ll have a lot of new antibiotics aimed at the pathogens we’re fighting today.