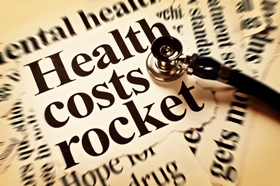 High drug prices are old news. Old, as in 19th century old. But that doesn’t mean they aren’t breaking news today. Breaking, as in breaking the family budget.

One of the speakers at the Institute of Medicines National Cancer Policy Forum flipped through slide after slide of newspaper headlines screaming about high drug prices. The headlines were from every decade stretching back into the 1800s.

Yet today’s headlines report what some have called “pornographic drug prices” as breaking news. What’s new is that drugs are now available for many more diseases that once had no treatment options. And those drugs aren’t cheap. Another thing that’s new is who’s paying for them.

In past decades, most U.S. patients have been immune to drug prices. Insurance, Medicaid or Medicare picked up most of the tab, so patients didn’t worry, or even know, about the full cost of their drugs. That’s changing as prices continue to escalate and insurance companies increasingly expect patients to cover a greater share of expensive prescription drugs.

Speaking at the forum, Yousuf Zafar, an oncologist at the Duke Cancer Center, said the average annual out-of-pocket cost for U.S. cancer patients is between $4,000-$5,000. Those costs are pretty evenly split between prescription drugs, physician care and inpatient care. While that probably doesn’t sound like much to policymakers who deal with budgets in the millions, billions and trillions of dollars, it’s big news for families living paycheck to paycheck.

Those costs could go up as the new health exchanges kick in, premiums increase and drug prices, for both old and new drugs, continue to climb. Zafar noted that the majority of Americans signing up for the exchanges are choosing the silver plans. A family of four making $47,100 a year would pay $10,400 out of pocket for health care before that plan kicked in. That’s more than a fifth of the family’s income. For many families, that added expense would break the bank. And it could be worse for patients facing 40 percent co-pays for drugs costing tens of thousands of dollars.

As patients have to cover more of the cost of their health care, the headlines about drug prices will get shriller about “greedy drugmakers” raking in billions of dollars a year from a handful of bestselling drugs. Studies like the recent Yale University report that found diabetics are paying about twice as much for treatment as they did 10 years ago will fuel those headlines.

What will be missing in that news is context. For instance, the price of other things Americans use every day has nearly doubled over the past decade, too. The average U.S. price for a gallon of gas in June 2004 was $1.82. Today, it’s $3.62.

That context will be lost by the heartstring pull of families facing bankruptcy because they can’t afford their health care. And even though doctor visits and hospital care make up two-thirds of that cost, drugmakers that charge $1,000 a pill will be portrayed as the bad guys.

What this all means is that drugmakers need to rethink the old pricing structure based on “what the market will bear.” Patients are part of the new market. They don’t care how much or how long it took to develop a drug. They’re looking at their bottom line. And theirs are the compelling stories that grab the headlines and are retold at congressional hearings.