Home » Blogs » BioWorld Perspectives » Shkreli: A supervillain with a dastardly plan? Or a distraction from the real problem?

Shkreli: A supervillain with a dastardly plan? Or a distraction from the real problem? 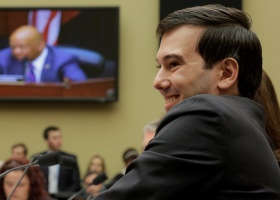 As the saga of Martin Shkreli continues to unfold in all its obnoxious glory, with every tweet and smirk signifying the former biopharma CEO’s apparent aspirations to a level of sheer jerkiness heretofore unseen on planet Earth, there’s one question that I – and probably a lot of other folks – can’t help but ask: Is this guy for real?

From his gleefully unapologetic, 5,500-percent price hike for an in-licensed, generic drug, to his now-infamous gray-hoodied perp walk following his arrest on charges of securities fraud, to his juvenile Twitter taunts – not to mention his outlandish video feud with the Wu Tang Clan’s Ghostface Killah (and, yes, I actually just typed the name Ghostface Killah in a BioWorld blog) – he comes across more as a cartoon supervillain, whose plans for world domination will certainly succeed if the Justice League doesn’t get its act together pretty soon.

Is there more to it than that? Possibly. His Friday live stream actually offered a few surprisingly thoughtful answers about the pharma industry, creeping in occasionally amid a snotty braggadocio worthy of a bratty 13-year-old. My BioWorld colleagues and I have debated internally: Is Shkreli a sociopath? Is he unhinged? Does he truly know something the rest of us don’t? Or has he simply decided this story needs a baddie and he’s up for the job? Whatever you think of him, you have to admit, he is entertaining.

And that’s a very bad thing.

His notoriety has hijacked what should be a sober conversation about the value of drugs vs. cost. Even Congress has fallen prey to his distracting behavior, with members putting in more effort into scoring points off Shkreli than tackling one of the issues that is poised to bankrupt the U.S. economy.

And, yes, ONE of the issues. The rising cost of the health care sector is not solely laid at the feet of biopharma. It also involves doctors and hospitals (overprescribing and inefficient diagnoses); it involves a lack of incentive for preventive care that could preempt costly treatments down the road; it involves the FDA that has not moved fast enough to adopt regulations that could accelerate drug and diagnostic development – and, by extension, a government that has failed to provide the FDA adequate funding to adopt such innovations; and it involves payers, who are forcing patients to pay more and more out of pocket.

But biopharma does own a share of the problem, too, and therefore must be part of the solution. That involves finding more cost-efficient ways to do drug development and lobbying the FDA to enact regulations that support efforts such as adaptive trial designs and companion diagnostics. And looking the other way when certain firms jack up the prices of drugs they had no hand in developing, with little R&D in which to invest the profits? That has to stop. It’s unacceptable, and it gives politicians more ammunition – maybe even enough to extend beyond election-year rhetoric – to enact price regulation rules that could have a huge impact on biopharma innovation.

And that also would be a very bad thing.