An end to Charlotte’s web? 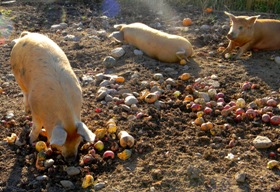 In the annals of popular literature, TV shows and movie scripts, only a handful of pigs have achieved mega stardom: Napoleon, who took over a farm and assassinated his political rivals; Arnold, who epitomized the couch potato at Green Acres; Miss Piggy, who used her feminine wiles and street smarts to become the piglet diva of the Muppets; Babe, who used his sheep-herding skills to survive and land a starring role in a movie; and Wilbur, who had the best ad agent of them all.

While other famous pigs were almost human in their aspirations and lifestyle, Wilbur was, well, just a pig. He lived in the farmyard with the other animals. He liked dozing in the sun, rolling in the mud, getting his ears scratched. Yep, give him a pig’s life any day!

That was the catch. He wanted a pig’s life – not a pig’s death. Wilbur’s fear of his destiny is what set him apart from the other pigs in the pen. That and his friendship with Charlotte, the arachnid answer to Madison Avenue.

While Wilbur was just like any other pig, Charlotte’s marketing campaign declared that he was "SOME PIG!" And her campaign at the county fair created the buzz that gave Wilbur a perceived value beyond his weight in ham.

As a result, Wilbur’s story had a happy ending. For him. He got to live out his life surrounded by his friends. Of course, the farmer had to eat the cost of taking care of a big hog that did nothing but dozed in the sun, rolled around in the mud, begged to get his ears scratched and pigged out at the farmyard trough.

The story was a bit different for Babe, the other porcine hero who escaped the butcher knife by becoming a county fair celebrity. Unlike Wilbur whose claim to fame was all in Charlotte’s web, Babe earned his keep by developing a skill that brought true value to the farmer and the sheep he guarded.

Just as Charlotte did for Wilbur, some drug companies want to save their bacon by trying to make their run-of-the-farmyard pills look spectacular. They find a Charlotte to spin webs proclaiming the wonders of their drug to the market, hoping to make their product stand out as truly “TERRIFIC” or “RADIANT.” As the perceived value goes up, so does the price.

But with a farmyard trough that can’t keep up with the voracious appetite of too many Wilburs, the fairgoers are starting to demand real value and an end to the web spinning. Today, it’s not enough to proclaim “SOME PILL!” To keep their high prices, drugs have to rise above the pigs in the farmyard by delivering real value to more than their investors.

Sorry, Wilbur. Your days may be numbered.