Home » Blogs » BioWorld Perspectives » Spittin’ Image: Or, How I Am Probably Going to Die

Spittin’ Image: Or, How I Am Probably Going to Die 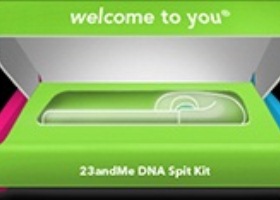 “Once you obtain your genetic information, the knowledge is irrevocable,” warn the service terms at saliva-testing firm 23andMe.com. The news wasn’t so bad, except for Alzheimer’s. Also, I’m sort of related to Stephen Colbert.

Of course, 23andMe, of Mountain View, Calif., can’t predict your medical future with certainty, but, using a saliva sample, does uncover a wealth of personalized data on predisposal to diseases – more than 240 health conditions and more than 40 inherited illnesses – along with likely drug responses and ancestry details that go back thousands of years.

Here’s the process: You sign up online and pay $99. Shortly, you get a kit in the mail that includes a vial with a gizmo at the top, along with a list of instructions that make filling the vial and sealing it up easy. They want rather a lot of spit. Then, you refold the box it arrived in and send it back via FedEx, prepaid, with the label already affixed. This part, considered alone, is a rare example of perfect design.

23andMe uses San Diego-based Illumina Inc.’s OmniExpress Plus technology, which tests for about a million single nucleotide polymorphisms, covering the entire genome. You’re notified by email when your results are ready. The health-risk results are divided into three categories: elevated, decreased and typical.

“Most striking” in my report, said geneticist Emily Drabant, is that I have one copy of the APOE3 gene (average risk for Alzheimer’s disease [AD]) and one copy of the APOE4 gene (high risk). About 22 percent of the population has the same genotype, which doubles my odds of AD.

I had just been reading Rebecca Solnit’s The Faraway Nearby, a book of essays that has partly to do with her struggle caring for her AD-stricken mother. And I was nursing painful tooth surgery that had me – in the ridiculous way of a pampered Westerner – considering mortality already. So the AD news felt even less welcome than otherwise.

Drabant quickly assured me that the 23andMe reports “aren’t destiny. They’re not telling you that you will or won’t develop the condition. There are people who have AD who don’t have the E4 allele, and there are people who have two copies of E4 and don’t have AD.” Age, she noted, remains the top risk factor for AD. Among people in their 80s, 25 percent to 50 percent will be afflicted.

“The second most striking thing [about your report] is that you are at decreased risk for so many conditions,” Drabant said. “Most profiles don’t look like this. You have really good genes.”

Among those in the lowered-risk category is age-related macular degeneration (AMD), which blinded my grandfather decades ago, before therapies existed, as in today’s hotly competitive AMD market. 23andMe provides more detail – many embedded, clickable links – showing the C2 and C3 genes that likely came from Grandpa, as well as the left-field (Mom?) LOC387715/ARMS2 gene, which seems to confer lower risk.

There’s a section on drug response. “The main thing that comes up for you is warfarin sensitivity,” Drabant said. “It’s become common practice for physicians to test people before putting them on the drug, but it’s still not standard of care.” Knowing ahead of time that the blood thinner is not a good idea makes sense. “You can pull out your mobile phone, and look at your 23andMe results, and share this with your physician,” she said. “You have it before you need to know it.”

The same chart tells a lot more, such as how I handle caffeine: “slow metabolizer,” meaning that it stays with me longer. True. If I drink it after about 3 p.m., I’m awake much of the night. And here’s something: in the “traits” section, readout on “asparagus metabolite.” For a long time, people believed that not everyone’s pee smells odd after eating asparagus. It turned out that everybody’s does, but not all sniffers register it – and 23andMe’s research established as much. My genes suggest I can smell asparagus pee. This is true.

The traits table takes a guess at such things as hair straightness and eye color, but gets the latter wrong about me. Mine are green; the findings say blue. Easiest to pinpoint genetically are blue and brown, Drabant explained. Hazel and green are harder.

She said the company pursues varying lines of investigation for varying reasons. “Part of it is, what do our users want to know?” Another item users proved curious about involves cilantro, and why some love the garnish while others say it tastes like soap. Genetics, again.

Pursing questions like this helps draw users into more participation, by way of surveys and telling their friends about 23andMe, so that the database can enlarge. The company is careful not to share anything that a specific user forbids, and the surveys are completely voluntary.

Another category of richly layered data that 23andMe provides is an ancestry overview, that is so full of information it’s impossible to summarize. It allows users to find others who have used the service and who share DNA. My search for matches turned up 991 of them. “You have some close ones – second to third cousins, which means you share a great grandparent,” Drabant said. There’s a message option for getting in touch, anonymously if you like.

My origins are 98.7 percent European, “but you have these two tiny, interesting pieces from Africa and East Asia,” Drabant said. “This means that, sometime in the last 500 years or so, you had ancestors were either from these places or they were descended from people in these places.”

Also, I belong to the same paternal haplotype as Stephen Colbert, a political satirist I know very little about except for YouTube clips, since I’ve not had cable TV since about 1989. I forgot to ask her how they got Colbert’s DNA.

“It means you have shared, distant ancestry, many thousands of years ago,” Drabant said of the Colbert coincidence. The faraway nearby, again.