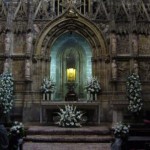 This week’s report of remissions in three advanced leukemia patients after immunotherapy has generated quite a lot of excitement in the media – which, in turn, has led to some backlash amongst the twitterati and in the blogosphere, noting that two complete remissions plus a partial one don’t make a blockbuster. Or anything, really, that will be broadly useful within the next few years. Mainly, when I look at these controversies, I am grateful that I write for such a smart audience. If you are reading this blog, chances are that you work in the biopharmaceutical industry – and if you do, there are exactly two possibilities: you know that most early stage treatments ultimately fail – or you’ve got bigger problems than whether my headlines are overly enthusiastic. Thank you, dear reader! And I’ll admit that I was rather amused to read in several headlines that cancer immunotherapy is now the “holy grail” of cancer targeting, and that this work advances us toward that holy grail. I distinctly remember from last year that eradicating stem cells is the holy grail of cancer therapy. And these CAR T cells target the surface marker they do, CD19, specifically because it is not on stem cells. Ergo, this can’t be the holy grail of cancer therapy. So there. Still, I’ll bet my own headline above made you do a double take. The fact of the matter is, few people want to read about the many things in science that don’t work. Few people want to read that this is an incremental advance, or the bigger story: three patients have had remissions, two died last year in separate trials using a similar approach, and we’ll know whether the approach works and is safe around, oh, 2016 if all goes well. Or maybe 2020. I don’t know what the right answer is in terms of reporting advances. I suppose having a holy grail of the year isn’t it. Still, I agree with my colleague Catherine Shaffer’s recent post about how science has ceded the language of hope and instead made itself comfortable in a culture of low expectations – and why that’s a problem. Yes, holy grail is over the top. So is some of the other coverage of this news. But is it really better to write “Early stage advance has an 8 percent chance of leading to cancer treatment decades hence?” And yes, it’s very important for anyone writing for a general audience, including cancer patients, to be explicit about the fact that these results will take a while to reach them, if they ever do. But the fact of the matter is, this is how the blockbusters, the game-changers, the lifesavers get their start: with two or three or five eye-popping successes that make drug developers take notice, and do what it takes to get to the next step. And yes, most of these starts are false ones. But all of the real starts start here. They do not start with the quacks and hacks who advocate maple syrup and baking soda, as Catherine detailed in her blog post, or breast milk, which a woman at my church swears cured a family member of leukemia and cheerfully recommends to anyone with a newly diagnosed relative, dismissing their anguish and fears in a way that is as grating as any oncologist demigod could be, in the name of “positive thinking.” It may be worth remembering a similar ruckus in 1998, when the New York Times ran a story about the promise of angiogenesis. EntreMed Inc. had a huge stock run-up, followed soon enough by a crash. The fur flew on the then smaller Internet, including a rather angry article titled “The New York Times Cures Cancer!” Whether the New York Times article was overly optimistic (for the record, I didn’t think so, but you can read the story yourself or its placement above the fold on p. 1 of the Sunday Times was too prominent is hard to say. But my point is this: blocking angiogenesis is now a successful clinical strategy. I’ll say it one more time: Most of these starts are false ones. But all of the real starts start here. We need to watch our language. But we can avoid reporting on the duds only at the price of not reporting on early signs of hope at all, leaving those looking for hope to search among the baking soda and the breast milk.