@ASCO12: Invisible Gorillas, IgNobel Prizes and What it All Means for Drug Discovery 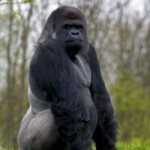 As I may have mentioned before, I love the IgNobel Prizes. So imagine my delight when I found myself in a session at ASCO’s 2012 annual meeting earlier this week listening to the speaker, Anthony Tolcher, talking about The Invisible Gorilla.

(If you haven’t heard about the experiment that demonstrated the existence of invisible gorillas, you can try it for yourself with this video. But do it before you read the rest of this blog post, because it will not work if you know what it’s about.)

In short, the invisible gorilla is a jarring example of what Christopher Chabris and Daniel Simons, who received the 2004 Psychology IgNobel Prize for their work, call inattention blindness. That is, when you are paying close attention to one thing, it is very easy – far too easy – to not notice things that are patently obvious when your attention is less focused.

The ASCO session where invisible gorillas got such prominent play was on “Early Drug Development: Casting a Wide Net versus Preselecting a Narrow Audience.” In his talk, Tolcher argued forcefully for the wide-net approach.

His take-home message: even when developing a targeted agent, don’t limit your Phase I trials to patients with the mutations you are targeting.

Tolcher gave several reasons for his point of view. Limiting patients means trials take longer to accrue, which is a problem in a Phase I trial. You have to find patients with the right mutation who are eligible for your trial, and by the time you have determined eligibility, the patient may be in another trial, making accrual take longer still. Even if your idea about how your drug works is correct, Tolcher said, “you can see that you will make progress go very slowly indeed” by limiting early trials.

But one of his main reasons was the invisible gorilla. That is, you can’t see what you’re not looking for, and if you are concentrating too much on one thing, you might miss other, arguably more spectacular things.

It’s the nature of the invisible gorilla that examples are hard to come by – after all, the point is that we missed them. But Tolcher used the example of Pfizer Inc.’s Xalkori (crizotinib) to show a gorilla that could have been invisible, had its developers been overly focused on what they thought their drug was all about.

Xalkori is now approved for the treatment of lung cancer patients with one molecular aberration, the EML4-ALK fusion. But originally, its developers thought it would target another oncogene, c-Met. It was during an early all-comers trial that its molecular effect was discovered. And if Xalkori’s developers had been too focused on c-Met to see their EML4-ALK effect, it is likely that today, the drug would be a failed c-Met targeting agent, not an approved EML4-ALK-targeting one that is now being tested in certain aggressive pediatric cancers.

“Molecular complexity is the invisible gorilla in cancer drug discovery,” Tolcher told the audience at ASCO. “And like any gorilla, complexity deserves respect.”