Home » Blogs » BioWorld Perspectives » Ebola is raging like a wildfire 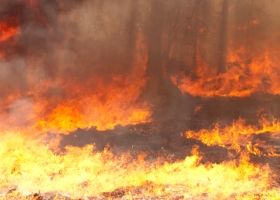 Testifying in a joint Senate committee hearing on Ebola this week, the CDC’s Beth Bell compared the epidemic spreading through West Africa with a forest fire. She stressed that any ember left undetected could quickly flare up and re-ignite the conflagration.

Her analogy took me back more than 25 years to my time as a news director for a radio station in Idaho. It was the summer of 1988, and Yellowstone National Park was on fire. The park neighbored the county where I lived, and the smoke from the fires formed a dense fog that blocked the sun for several weeks.

The comparison between the Yellowstone fires and the Ebola epidemic is apt. Both started quietly and were virtually ignored until they were out of control. By then, full-scale military efforts and millions of dollars were needed to try to contain both disasters.

The Ebola crisis began late last year when a toddler first contracted the dreaded disease. After a brief respite, the epidemic began to spike in April. But even as late as June, the international community turned a deaf ear to pleas for help coming from a few volunteer organizations that were the only defense against the spread of the disease. It wasn’t until travelers carried the virus to Nigeria and U.S. health care workers were infected in July that the U.S., World Health Organization and other countries started to respond.

There were reasons for the delay. Past epidemics were much smaller, so they didn’t pose an international threat. Until this outbreak in Guinea, Liberia and Sierra Leone, the largest Ebola epidemic was confined to 400 people. The current epidemic has now spread to more than 5,000 people, with about half of the patients dying.

The Yellowstone fire also started small. It was actually several fires that flared up in one of the driest summers on record. At the time, the U.S. Park Service had a let-it-burn policy that it applied to all naturally caused fires. It didn’t adjust that policy to take into consideration the dryness of the season or the massive amount of dead lodgepole pine that had fallen victim to a pine beetle epidemic in Yellowstone and the surrounding area.

In July 1988, a firewood cutter dropped a cigarette in the Targhee National Forest, igniting the North Fork Fire. Despite Forest Service efforts to control the blaze, the fire swept into Yellowstone where park officials let it burn. The North Fork Fire grew rapidly, threatening historic park buildings, forcing the evacuation of a neighboring town and spreading deeper into neighboring national forests.

By then, the Park Service was forced by public pressure to address the fires that were raging out of control. But the North Fork Fire was too big for the Park Service. It had to call in the military. More than 4,000 troops were brought in, along with helicopters and fixed-wing aircraft. They were joined by 5,000 other firefighters. The total cost of the operation was $240 million in today’s dollars. Yet it wasn’t enough. The fires continued to burn until mid-November when cooler temperatures, snow and rain finally extinguished the flames. By time the fires had run their course, nearly 800,000 acres of parkland had been scorched, as well as thousands of acres in the nearby national forests.

Too little too late?

As Bell testified at the Ebola hearing about the spread of the disease, I remembered standing on a mountain path in Yellowstone, watching as an Army helicopter dipped its bucket into the Yellowstone River before dropping the water on the fire racing up a mountain on the other side. As quickly as those flames were doused, embers would spark to life further up the ridge. So it is with the spread of Ebola. Unless the epidemic is controlled quickly, it could spread to 100,000 people within nine months.

The U.S. and other governments are now responding to the Ebola epidemic. The U.S. has committed more than $175 million to the battle to date and is sending in supplies, equipment and 3,000 troops. But the question remains: Is it too late? The lesson to be learned from this crisis, Sen. Tom Harkin (D-Iowa) said at the hearing, is that “we must stop chasing diseases after the fact.”

The testimony at the hearing highlighted a few aspects where the analogy between the Ebola epidemic and the Yellowstone fires breaks down. When the wildfires raged through Yellowstone, the government agencies fought with a concerted effort and a defined line of command. But in the battle against Ebola, each U.S. agency is doing its own thing. While USAID is the agency in command in West Africa, there is no single line of command back home.

That worried senators from both sides of the aisle. “We need a point person,” Sen. Barbara Mikulski (D-Md.) said. She also noted that while USAID does a great job in responding to disasters overseas, the size and scope of this epidemic requires far more than what USAID can provide.

Another break in the analogy is the consequences. While the Yellowstone fires burned more than a third of the park, no human lives were lost. As for the wildlife, all but the moose populations have fully rebounded. The damage in West Africa is far more serious than charred acreage. Nearly 2,500 people have died and the death toll is rising every day. Entire societies are collapsing because of the weight of this burden, Kent Brantly, a missionary doctor who contracted the virus, testified at the hearing.

“Many have used the analogy of a fire burning out of control to describe this unprecedented Ebola outbreak,” Brantly said in his testimony. “Indeed it is a fire ‑ a fire straight from the pit of hell. … We must mobilize the resources needed to keep entire nations from being reduced to ashes.”

For complete coverage of the Ebola crisis, see BioWorld’s Special Report: The Push to Contain Ebola Virus, which includes a chart detailing all Ebola drugs & vaccines in the works.