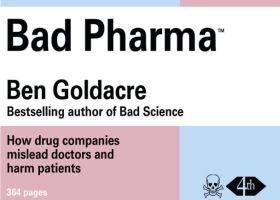 So urgently did I think I wanted to read Ben Goldacre’s Bad Pharma, that I ordered it from Amazon’s UK site last November, unwilling to wait for U.S. publication – which happened just as I reached the end, polishing off the book’s afterword, called “Better Data.”

Goldacre, it turns out, is as much bothered by the secrecy of data as by its quality, and he has also set up an activist website, where the public can petition for “all [clinical] trials to be registered, for all summary results to be reported, and for full clinical study reports [CSRs] to be made publicly available,” he writes on his original site, which takes its name from Goldacre’s previous book. “CSRs are important, because it is now clear that brief summaries about trials [such as academic journal articles] can be incomplete or misleading,” writes Goldacre.

I probably took so long to get through the book because I sensed that the heft text would take on “the usual Big Pharma critiques, touching on the ethical morass of human trials and the infuriating dirty tricks pharmaceutical firms use to market their drugs both to patients and to doctors,” as a review in the New York Times pointed out late last month. But there’s more to the book.

Among the firms Goldacre, a London doctor, takes to task is GlaxoSmithKline plc, which surprised the author and probably everyone else in February when the firm came aboard his cause, and agreed to post its CSRs online. “They have also made sensible noises about the practicalities, which shows that they have thought about the implications, and they also discuss prioritizing which CSRs to work on first,” writes Goldacre. (Another reason for my slow going with this book: dread of stiff British, physician-style writing and clichés. Practicalities, implications and prioritizing. “Because [GSK has] discussed these technical details – while I will always wait for the proof in the pudding – I do not believe this is mere lip service,” he goes on, wedging in a couple more.)

But, as a blunt instrument, the book seems to be having an effect. Will AstraZeneca plc join GSK? Goldacre summarily smacks down the developer of Iressa (gefitinib), a rather easy target, in his book. “Large, well-conducted fair tests of Iressa had shown that it was no better than a dummy sugar pill containing no medicine,” he writes, yet patients who turned out at an FDA advisory panel meeting sang the drug’s praises.

“When the committee charged with approving the drug [sic] cast their votes, they went 11-3 in favor,” Goldacre recalls. “We can only wonder if individuals who had not been successfully treated with Iressa would have been flown across the country to speak their personal truth. Perhaps not. Perhaps they might be dead.” Perhaps. But the issue of full trial-data disclosure, thanks to Goldacre’s book, is anything but.